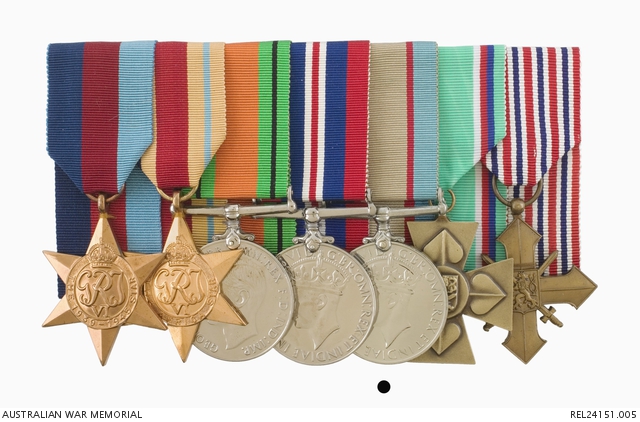 NX6461 Lawrence Phillip Saywell was 20 years old when he enlisted in the Second AIF, in November 1939, soon after the outbreak of the Second World War. As he was under the age of 21 his mother signed his attestation papers. Although he had poor eyesight, the examining medical officer apparently overlooked this, and Saywell was assigned to the Australian Army Service Corps, a non-combat unit attached to 17 Infantry Brigade, 6 Division. After initial training in Australia, Saywell embarked for service in the Middle East in January 1940. His unit spent most of the rest of the year training in Palestine before being sent to support the first Libyan campaign. At the end of March 1941 Saywell embarked for Greece with the ill-fated Allied expeditionary force. He served first in Greece before his unit was withdrawn to Crete in the face of the German advance. Saywell was reported missing on 5 June 1941. He had in fact been captured and taken prisoner of war, although this was not confirmed until the following November. Transported to Germany, Saywell was first held at Stalag VIIA at Moosburg. In July 1943 the International Red Cross reported that he had been transferred to Stalag VIIB (344) at Lamsdorf in Poland. He also spent time in the relative freedom of a number of labour camps in central Europe, taking the opportunity to learn to speak German, and possibly some Russian. He and a New Zealand fellow prisoner, Sydney 'Mac' Kerkham, made at least two unsuccessful escape attempts. They were finally successful in January 1945 when the Germans ordered the evacuation of prisoner of war camps in the face of the approach of Soviet Russian forces. In the confusion Saywell and Kerkham escaped from a camp at Pardubice, in what is now the Czech Republic, and found refuge with families near the village of Zderaz. Slovenian and Czech partisan groups in the area, supplied and encouraged by Soviet forces, harried the Germans, who in turn conducted anti-partisan operations around Zderaz. Although sometimes close to discovery, Saywell and Kerkham remained hidden. In the first week of May a major national uprising against the Germans flared up in Czech lands and the German army retreated west. Hearing of this, Saywell and Kerkham came out of hiding and made their way to Miretin, where, on 8 May, the official date of the end of the war in Europe, they encountered a confrontation between a retreating German column and a Soviet-Czech partisan group which had taken about thirty German officers as hostages in the local school. Saywell offered his services as an interpreter and succeeded in getting the officers released and disarmed. For reasons that are not clear he was shot and killed by an unknown German soldier shortly afterwards. His body lay in state in the village school until 10 May, when he was buried in the local cemetery. Later in 1945 the villagers erected a headstone on his grave and a stone memorial at the actual site of his death. In November 1945 he was posthumously awarded the Czechoslovakian Military Cross. In 2005 a further posthumous award of the Meritorious Cross was made by the Czech Republic. Although Lawrence Saywell's remains were transferred to the Prague War Cemetery after it had been built in 1949, his death is still commemorated at Miretin every year, when a ceremonial procession takes place between the site of his original grave and his memorial stone.