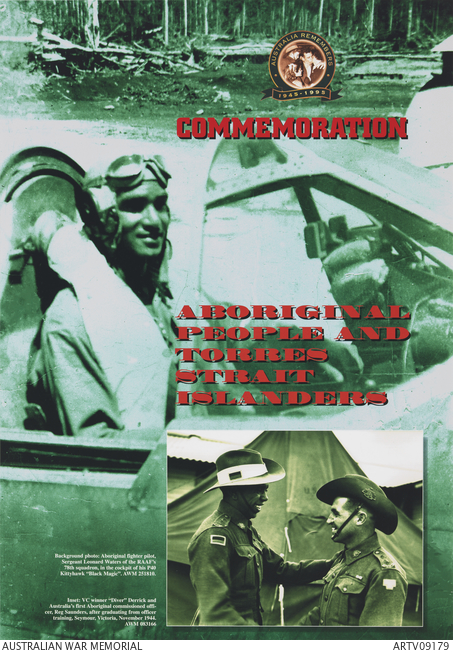 A poster produced by 'Australia Remembers 1945-1995' to commemorate the role of Aboriginal and Torres Strait Islanders in the Second World War. The background image is a photograph of Aboriginal fighter pilot Sergeant Leonard Waters, 78 Squadron RAAF, in the cockpit of his P40 Kittyhawk 'Black Magic'. An inset photograph at lower right is of VC winner 'Diver' Derrick and Australia's first Aboriginal commissioned officer, Reg Saunders, after graduating from officer training at Seymour camp in Victoria, November 1944. Australia Remembers, 1945-1995 was a program of activities organised to commemorate the 50th anniversary of the end of World War II, culminating in key national ceremonies held in Brisbane on 15 August 1995 to mark the 50th anniversary of Victory in the Pacific.