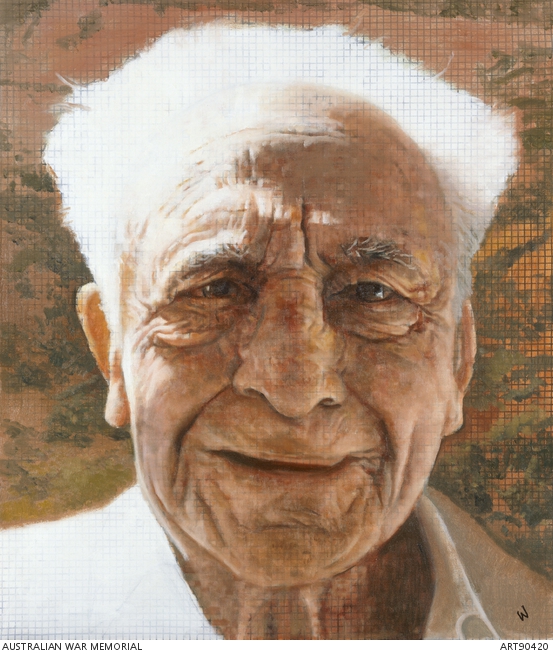 Ernest Guest (b.1895) enlisted early and landed at Gallipoli with the 13th Battalion. He was wounded during the Battle of Lone Pine and evacuated. He was discharged medically unfit in 1916 and went back to Brisbane. He later rejoined in 1917 to train for the Australian Flying Corps (AFC). He went to Oxford and then to Gloucestershire and graduated as a pilot in 1918. During the Second World War he joined Qantas Airways as an engineer and remained there until his retirement. Depicts a portrait of 18876 Private Ernest George Guest, on pilgrimage for the 75th anniversary of the Landing at Gallipoli. In 1990, Australia celebrated the 75th Anniversary of the landing of Australian troops at Gallipoli. To commemorate this event, the Federal Government arranged for a group of veterans to return to Gallipoli and commissioned Westwood to travel with them to record their experiences.
The AFC was established in 1913. In 1915 Australia was asked by Britain to form compile squadrons for service with the RFC . Australia responded by despatching No. 1 squadron to Egypt. During the next two years the squadron operated first from Heliopolis and later in Palestine and Syria. More squadrons were raised in Australia for the Western Front. No. 2, 3 and 4 squadrons arrived in France during August, September and December 1917 respectively. No. 2 squadron (flying DH5s) was attached to the Third Army and during the Battle of Cambrai in November 1917 carried out patrol duties, ground strafing of enemy troops and bombing. No. 3 squadron (flying RE8s) was supporting the last phase of the Passchendaele campaign in Flanders. The last Australian squadron to arrive (No. 4 flying Sopwith Camels) took up its duties with the First Army. At the end of the First World War, the AFC was disbanded and replaced by the Australian Air Corps which became the Royal Australian Air Force (RAAF) in 1921.