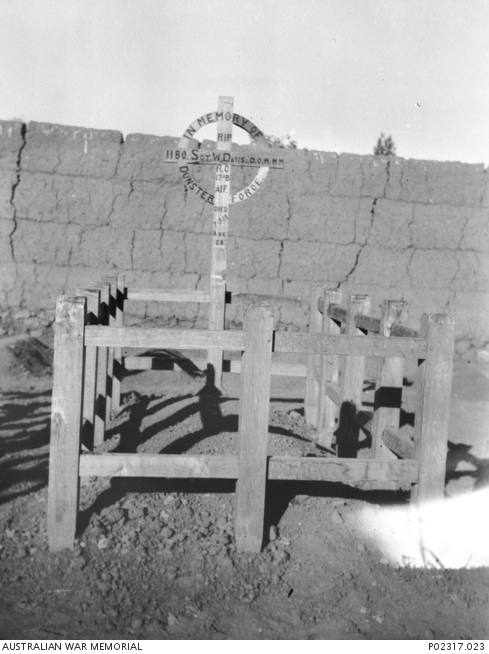 Original grave of 1180 Sergeant (Sgt) Wilfred Davis, DCM, MM, 17th Battalion and Dunsterforce, at Hamadan, Persia, 255 miles (410 kilometres) east north east of Baghdad, Iraq. Sgt Davis enlisted on 1 March 1915 as a 26 year old tram conductor from Kensington, Sydney, NSW and embarked for overseas with the 17th Battalion on 12 May 1915 aboard HMAT Themistocles. The 17th Battalion landed at ANZAC Cove on 20 August and remained at Gallipoli until evacuated in December 1915. Following further training in Egypt, the 17th Battalion arrived in France in March 1916. Sgt Davis was awarded the Distinguished Conduct Medal (DCM) for "conspicuous gallantry during operations" at Pozieres, France, on 28/29 July 1916. "Both by day and night he went out fearlessly over the parapet searching for and bringing in the wounded under heavy fire." On 25 January 1918, he was selected for special duty with the Imperial Army and became part of Dunsterforce which was the name given to a small multinational force of just under 1,000 elite troops (British, Canadian, Australian and New Zealanders) who were commanded by the Russian-speaking General Lionel Dunsterville. Their main aim was to prevent an invasion of India by a combined German and Turkish force, and to secure control of Persia. Dunsterforce's area of operation was in what is now north and west Iran, and the area between the Black Sea and the Caspian Sea, in present day Armenia, Azerbaijan and Georgia. Sgt Davis disembarked at Basra (in present day Iraq) on 2 March 1918 and died on 7 July 1918 of cholera at the age of 28. He was posthumously awarded the Military Medal (MM) for "conspicuous bravery and devotion to duty while serving with Australian Imperial Expeditionary Force."