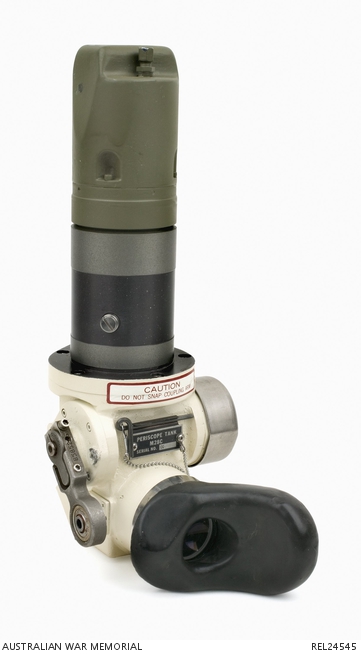 The M28C periscope is of monocular type with range graduations etched onto the center lens. The prism is stationary and is mechanically linked to the machine gun supporting cradle. The mechanical linkage maintains the line of sight parallel to the line of fire of the machine guns.

This is an example of the M28C periscope, which is the sighting equipment of the T50 (Aust) Cadillac Gage turret. This turret was used to equip the M113A1 Armoured Personnel Carrier (APC) used by the Australian Army during the Vietnam conflict. Units equipped with M113A1 APCs equipped with T50(Aust) turrets included 3 Cavalry Regiment, 1 Armoured Regiment, and 1 Field Squadron. The M28C periscope projects through the roof of the turret and is mounted on a M104A1 periscope mount.