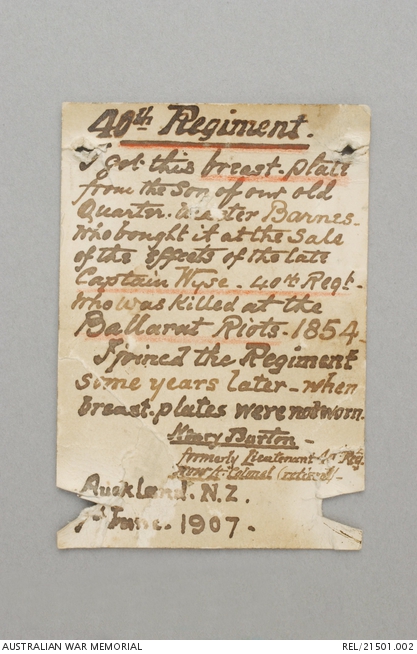 Piece of cardboard originally attached to the back of the British 40th Regiment of Foot shoulder belt plate worn by Captain Wyse (or Wise) when he was killed at Eureka Stocade in 1854. Card reads '40th Regiment. I got this breast-plate from the son of our old Quarter-Master Barnes, who bought it at the sale of the effects of the late Captain Wyse 40th Regt who was killed at the Ballarat Riots 1854. I joined the Regiment some years later when breast plates were not worn. Henry Burton, formerly Lieutenant 40th Regt, now Lt Colonel (retired) Auckland. N.Z. 1st June 1907.'

This document, stating the provenance of Captain Wyse's shoulder belt plate, was written in 1907 by Henry Burton, formerly a lieutenant (later lieutenant colonel) of the 40th Regiment. Henry Christopher Wyse (also known as Wise) led a company of 106 men of the 40th Regiment, sent from Geelong to deal with unrest among the gold diggers at Ballarat. When the rebel miners made a stand at Eureka Stockade on 3 December 1854, Wyse remained at his post despite receiving a flesh wound to his thigh. He was then mortally wounded by a German digger and fell on the inside of the Stockade's entrenchment. Shot through the head of the tibia and fibula, where they joined his knee, a decision was made to amputate his leg later that day. Wyse appeared initally to make a good recovery but he developed an infection and died on 21 December 1854, at the age of 26. He was given a military funeral in Ballarat.