Two black Labrador dogs which had a lot of sniffing to do during Operation Lismore that was ... 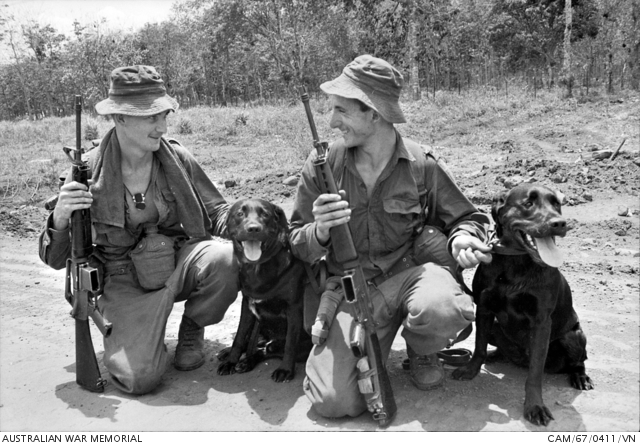 Two black Labrador dogs which had a lot of sniffing to do during Operation Lismore that was completed by 7th Battalion, The Royal Australian Regiment (7RAR). The dog handlers are 19983 Private (later Lance Corporal (L Cpl)) Thomas Douglas (Tom) Blackhurst of Swansea, NSW (left), with Justin and 43921 L Cpl Norman Leslie (Norm) Cameron of Kingston, SA, (right) with Cassius. The dogs were responsible for locating Viet Cong fighters and some enemy installations. L Cpl Blackhurst was killed in action on 17 April 1971 while serving with the Australian Army Training Team Vietnam. He was a radio operator, calling in helicopter of 9 Squadron RAAF for a medical evacuation. The helicopter crashed, killing L Cpl Blackhurst and 3170244 L Cpl John Francis Gillespie of 8 Field Ambulance, the medic on board.