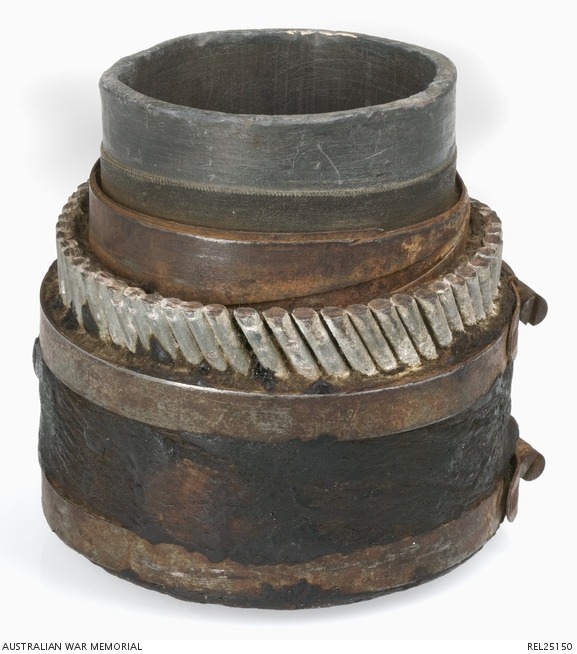 This piece of underwater fuel pipe-line was collected by Lieutenant Lyle Clark Miller, Royal Australian Naval Reserve (RANVR) who served aboard HMS Sancroft, a cable laying ship from March 1944 to May 1945. HMS Sancroft laid Hartley, Anglo-Iranian, Siemens (HAIS) pipe as part of Operation PLUTO (Pipe-Line Under The Ocean) in support of Operation Overlord, laying Pipeline Number 1 from the Isle of Wight to Cherbourg, France.

Operation Overlord was the codename for the Battle of Normandy, the Allied operation that launched the successful invasion of German-occupied Western Europe during the Second World War. The operation was launched on 6 June 1944 with the Normandy landings, popularly known as D-Day.

The operational requirement of a petrol pipeline across the English Channel was stated by the Chief of Combined Operations, Lord Louis Mountbatten, to Mr. Geoffrey Lloyd, the Secretary for Petroleum, early in April, 1942. Research began shortly after, and was designated Operation PLUTO (Pipe Line Under The Ocean). The Post Office, the Admiralty, Combined Operations, the War Office, and the Anglo-Iranian Oil Company were called together at the Petroleum Division to arrange further research, development and manufacture of a type of pipeline that had been used on a difficult route in Iran before the war. A group of companies including the Anglo-Iranian Oil Company Ltd., Messrs. Siemens Brothers & Co. Ltd., Messrs. Henleys and Messrs. Pirelli were involved, and combined their research operations. Under the direction of A.C. Hartley, Chief Engineer of Anglo-Iranian, this group developed one of the two types of pipeline (aka cables). This section of pipe is an example of the lead, Hartley, Anglo-Iranian, Siemens (referred to as HAIS), 3 inch type. The other type of pipeline was steel. It was made by Hammick and Ellis, and referred to as HAMEL.

HAIS pipe consisted of lead pipe wrapped with two layers of paper tape, one of cotton, four layers of steel tape (right hand lay), jute, longitudinal steel wires (left hand lay) and further lays of jute covered with whitewash. The lays of the tapes and of the wires are designed to balance each other so that the cable will not twist under the influence of internal pressure. Initially, Henleys made all the lead pipe in their `Judge' straight-through presses but Pirelli's continuous, and vertical presses, were later used as well. The early 2 inch diameter pipe configuration was increased to 3 inch in 1943, thereby trebling the output capacity of each pipeline. The final design of the HAIS pipeline had the following advantages; it was not particularly susceptible to tidal and weather conditions; it was flexible which allowed it to be laid easily, and to follow the contours of the surface it was laid on; it could be laid continuously, quickly, and with minimal jointing; it was able to withstand high internal (up to 3,000 lb./sq.in., although normal operational pressure was around 1,500 lb./sq.in.), and moderate external pressure; it was easily repaired if damaged by enemy action or being dragged by a ship's anchor; two lengths already fitted with joints could be coupled together at sea in twenty minutes using the specially designed split muff coupling, without the need for bolts; because multiple lines could be laid, the required quantity of fuel could be delivered without risking the loss of a significant percentage of fuel in the event of damage occuring to a line. Special cable laying ships were equipped to carry sufficient length of the unusually heavy cable.

Two vessels were used to lay the pipe: HMS Sancroft and HMS Latimer. Each was able to carry 100 miles of 3 inch cable weighing about 6,400 tons. The pipe was usually handled, stored and laid with water at 200 lb./sq.in. pressure, inside. During laying this prevented the external water pressure from squashing the pipe. Discs of thin copper sheet which would withstand 200 lb./sq.in. pressure were incorporated in the joints during laying. These were designed to burst under normal operational pressure when fuel was pumped through the line. The first satisfactory test of pumping petrol over a long distance through a sea line occurred at Watermouth on 4th April, 1943. Some sections of pipeline were laid within Enlish coastal waters prior to the cross-Channel construction.

Operation Pluto was ready some weeks before D-Day but could not begin until 12th August, 1944, because of the delay in capturing Cherbourg and in clearing sea mines. Shore facilities for the pipelines were operated by the National Oil Refineries, the Royal Engineers, and the Royal Army Service Corps who had specially trained Bulk Petroleum Companies. Each 3 inch line from the Isle of Wight could deliver about 400 tons a day, or 120,000 gallons, and the lines were laid quickly enough to keep ahead of the capacity to pump ahead from Boulogne.

Eventually, eleven HAIS and six HAMEL lines were laid with a capacity of more than 4,500 tons, or 1,350,000 gallons a day, and 1,000,000 gallons a day were pumped across for a period. General Eisenhower described Pluto as `second in daring only to the artificial harbours projects' and that `this provided our main supplies of fuel during the winter and spring campaigns'. Pumping continued until the end of July, 1945 to enable all available tankers to be diverted to the Far East. The Quartermaster General claimed `it saved a very large tanker tonnage which was badly needed in the East'.