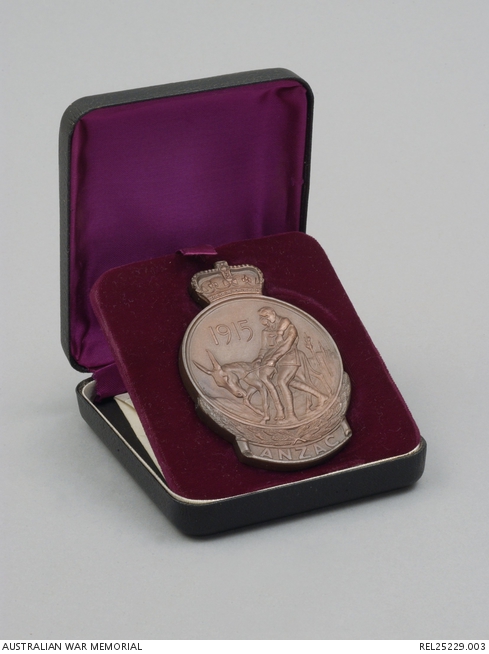 Bronze medallion issued by the Australian government in 1967 to commemorate the 50th anniversary of the Gallipoli landings in 1965. The medallion was issued to surviving veterans or their next of kin. It was designed by Raymond Ewers. The medallion is surmounted by a Queen's crown. Obverse shows Simpson and his donkey, a laurel wreath, and '1915 ANZAC'. Reverse shows a map of Australasia with the Southern Cross superimposed over it, fern fronds and the engraved name of the recipient 'R.R. SHAPLAND'.

968 Private Reginald Reed Shapland, enlisted on 3 March 1915 and served in 21 Battalion and 6 Light Trench Mortar Battery. While serving in 6 LTMB he was second in charge of a mortar. During an attack at Bullecourt, France on 4 May 1917 he was killed in action when he was shot in the chest.