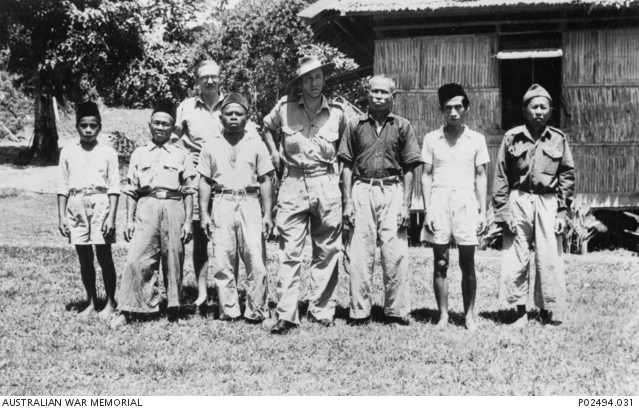 Sapi, North Borneo. 7 August 1950. V18803 Major (Maj) H. W. S. (Harry) Jackson with men from the village of Sapi who had assisted Australian prisoners of war and in particular, with the exception of Orang Tua (O.T.) Onchi, the head man, these men were responsible for the rescue of Bdr James Richard (Dick) Braithwaite. From left to right are: Aliudin; Mangulong; Roy Parsons; Sapan; Maj. Jackson; O.T. Onchi; Amit; and Sagan. In 1946 the Australian-British Reward Mission led by Maj. Jackson, as the Australian Government representative, was joined by Maj. R. K. Dyce, representing the British Army, and two journalists from the ABC, Colin Simpson and William McFarlane, travelled to North Borneo to investigate, report and reward the assistance provided to Australian and British prisoners of war (POWs) by local natives. In 1942, 1800 Australian and 600 British POWs were sent to Sandakan from Singapore and Java. Those prisoners still alive in the Sandakan POW Camp in January 1945 were forced to help evacuate the Japanese Imperial Army from Sandakan to Ranau in three brutal death marches where the men were forced to march the 150 miles to Ranau. Any POWs still alive after the last march, were killed. Only six prisoners, who had all escaped during the death marches, were still alive at the end of the war. POWs had made pledges to the local people who had assisted them and the Australian Government decided that these obligations should be investigated and rewarded. (Donor H. W. S. Jackson)