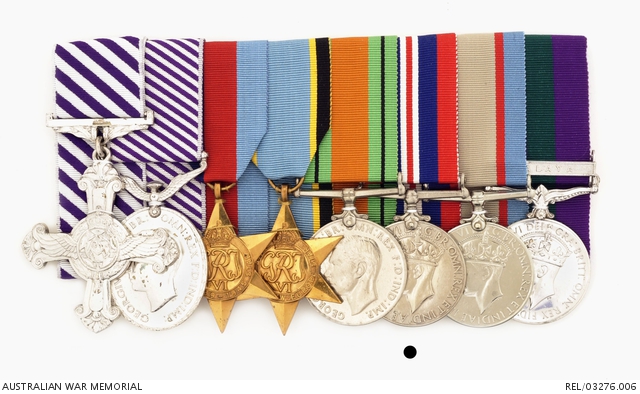 404330 Flight Officer Harold Frederick Connely, RAAF, served in 97 and 207 Squadrons, RAF, as a navigator in Lancaster bombers. Born in Brisbane in 1921, he enlisted in August 1940 and trained in Canada as part of the Empire Air Training Scheme. As a navigator in bomber command most of Connely's missions were on night bombing raids against such heavily defended targets as Bremen, Essen, Hamburg and Dusseldorf. He took part in the thousand-bomber raid against Cologne and recalled witnessing 'the fiercest fires I have ever seen'. Connely's 50th mission, to Berlin, was accompanied by a BBC commentator and sound engineer who recorded the crew live for later rebroadcasting to the British public. Connely can be heard speaking and singing on the recording. He was awarded the Distinguished Flying Cross October 1943 as a Warrant Officer in 207 Squadron, RAF. He had previously been awarded the Distinguished Flying Medal as a Flight Sergeant with 97 Squadron, RAF. Connely returned to Australia in 1944 and operated as a transport pilot in the Pacific campaign with 33, 36 and 37 Squadrons. He continued to serve in the RAAF until his retirement in 1962.