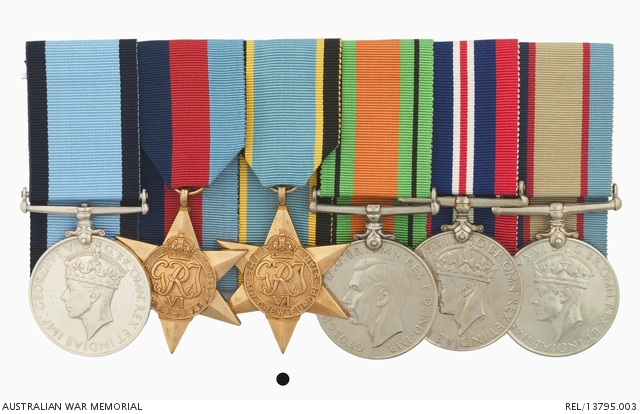 Born on 3 February 1919 at Marrickville, NSW, Geoffrey Charles Chapman Smith (Chapman-Smith post war) enlisted in the RAAF on 9 October 1942. Smith trained at Parkes and Port Pirie in Australia and then travelled to the United Kingdom to train with 460 Squadron at Binbrook. He then commenced his service with Bomber Command with 625 Squadron at Kelston. He flew with an all RAF crew and his first operational sortie was a raid on Berlin on 2 December 1943. He did three more raids over Berlin before being posted to 156 Squadron in January 1944, having volunteered for the Pathfinder Force. With 156 Squadron he completed two more Berlin raids. The second trip, on 15 February, saw the crew's aircraft attacked by two enemy fighters.

Ordinarily a mid-upper gunner, on this trip Smith was flying for the first time in the tail turret. He destroyed one fighter before the Lancaster was severely damaged. Despite damage to his turret and extensive wounds to his right leg, Smith continued to defend the aircraft and refused assistance until all the crew were safe. His leg was later amputated. For his actions he was awarded the Conspicuous Gallantry Medal (CGM), and the Polish Cross of Military Merit. He was presented with the CGM by King George VI at Buckingham Palace on 12 June 1944.

Smith spent ten months convalescing before being posted to RAF Station Upwood, Cambridgeshire in December. Here he served beside his old 156 Squadron, which had relocated from Warboys to Upwood during his recuperation. Despite the loss of his leg, Smith was commissioned pilot officer in November 1944 and flying officer in May 1945 shortly before returning to Australia. He was discharged on 25 September 1945.