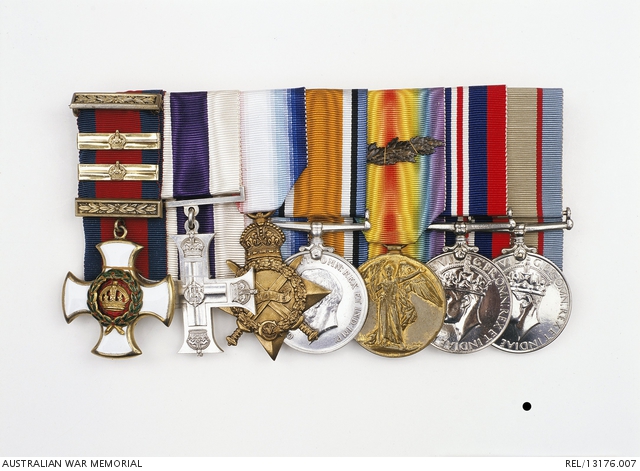 Australia Service Medal awarded to Brigadier Norman Marshall. Marshall was born in Callandar, Scotland on 10 February 1886, the son of the Reverend Alexander and Jean Crawford (nee Hay) Marshall. He was two years old when his father moved his family to Australia to take up a position at Scots Church in Melbourne. Educated at Scotch College, he was a superb athlete and a gifted boxer. Prior to the First World War he was the manager of a paper mill near Geelong in Victoria. Enlisting as a private with 5 Battalion (5 Bn) within two weeks after the outbreak of the First World War, Marshall rose to become a battalion commander by early 1917. On 25 April 1915, 5 Bn was part of the second wave to land on Gallipoli. For his actions during the Second Battle of Krithia on 8 May, Marshall, by now a second lieutenant, was awarded the Military Cross. The recommendation for the award has not survived.

In France, he was unsuccessfully recommended for a French Legion of Honour for his actions at Fromelles in July 1916. In April 1917, now a lieutenant colonel, he assumed command of 60 Battalion. He was awarded his first Distinguished Service Order (DSO) for his actions during the fighting at Polygon Wood in September 1917. He was awarded a Bar to his DSO for his actions at the Second Battle of Villers-Bretonneux in April 1918. On 1 May 1918 Marshall was transferred to command 54 Battalion. A second Bar to his DSO was awarded for his conduct at Peronne in September 1918. He remains the only Australian to have been awarded the DSO with 2 Bars.

Two of his brothers also served in the AIF. Louis Beuvelot Marshall, served with 10 Battery, 4 Australian Field Artillery Brigade and Crawford Cleland Marshall served with the Australian Army Medical Corp. In May 1919 Marshall was transferred to the AIF Sports Control Board and coached the AIF No. 1 crew to victory in the King's Gold Cup at the Henley on Thames Regatta. His AIF appointment was terminated on 14 February 1920.

On 10 July 1939, with the threat of a Second World War looming, Marshall was given command of 11 Light Horse Regiment. In May the following year he was promoted to temporary brigadier commanding 1 Cavalry Brigade. Two months later he surrendered the rank to take command of 2/25 Infantry Battalion. In October 1940, Marshall was again promoted to brigadier and given command of 27 Brigade. His son, Lieutenant Archibald Hay Marshall, was killed on 4 May 1941 during the siege of Tobruk. Two months later Marshall was forced to relinquish his post due to ill health. Brigadier Norman Marshall DSO and 2 Bars, MC died in Melbourne on 12 September 1942. His remaining son, Captain Alexander Marshall was awarded the Military Cross for his actions during fighting at Shaggy Ridge in New Guinea on 21 January 1944.