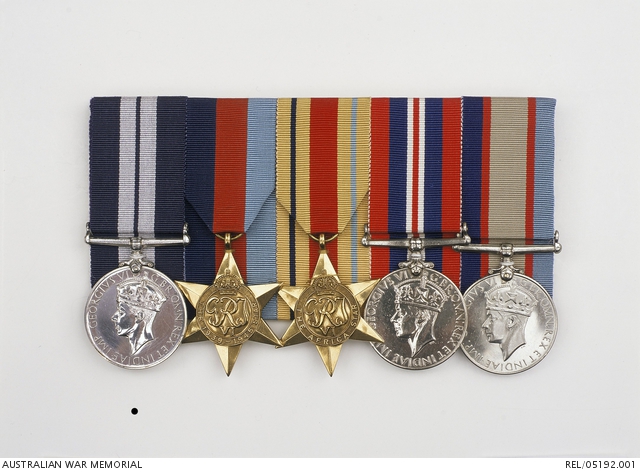 PM3322 Able Seaman Noel Jack Johnston was born in 1916 and enlisted in the Royal Australian Naval Reserve on 31 January 1941, from Orbost, Victoria, where he was a farmer.

Johnston volunteered for special anti-submarine work and was sent to England for training. He was posted to the cruiser HMS Cleopatra and sent to the Mediterranean. The ship was damaged by bomb attacks en route and Johnston was transferred to serve on a Royal Navy motor launch, ML1069, assigned to protecting Tobruk Harbour.

Johnston was awarded the Distinguished Service Medal during the German occupation of Tobruk and consequent Allied withdrawal in July 1942. The recommendation for his award reads, 'For courage, resolution and devotion to duty during the evacuation of Tobruk under heavy fire in 1942. Though seriously wounded he steered ML1069 back to the jetty after that vessel had been hit and set on fire. By this act, rescue of the wounded and their embarkation by ML355 was rendered possible.' An Australian witness to the incident stated that Johnston's motor launch had been hit by German tank fire from the shore while attempting to clear the harbour. Despite wounds to his body and legs, and the death of most of the launch's crew, Johnston returned fire with the launch's machine gun and took control of the vessel.

Johnston was hospitalised for several months recovering from his wounds in Alexandria. He was then posted to the Royal Navy's combined training school in Egypt, HMS Saunders, then to HMS Assegai, a training establishment at Durban in South Africa. From the end of November until April 1943 he served in the Indian Ocean in HMAS Napier and HMAS Cessnock. It was during this period that he was diagnosed with anxiety state at the Royal Navy hospital at Bombay. It was recommended that he be transferred to non-combatant duties either at a shore establishment or on a ship large enough to be carrying a doctor.

Johnston returned to Australia, where he served in naval shore establishments in Victoria and New South Wales. He was discharged on 25 March 1946 and returned to farming. He was accidentally killed in 1957.