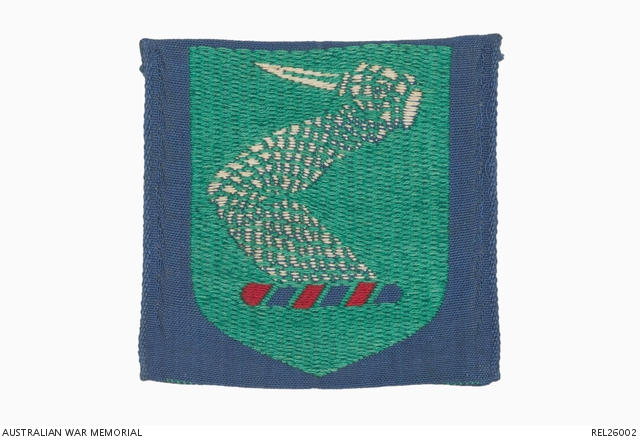 Machine woven cotton formation sign of 13 Infantry Brigade. The badge, for wear on the left arm, is designed in the style of an armourial crest, and consists of a blue square overlaid with green shield. Within the shield, in red, white and blue, is an embowed mailed arm holding a dagger, pointing to the left.

Introduced to the Australian Army in 1950, and adopted from British Army practice, formation signs were intended to be worn on each sleeve in conjunction with embroidered shoulder titles. This combination, which replaced the traditional Australian system of colour patches, enabled an observer to determine both the wearer's parent formation, and their corps or unit within that formation. The use of formation signs within Australia was discontinued in about 1960, with the introduction of the new, American based 'Pentropic' system of military organisation. Australian units serving overseas, however, continued to wear them for many years. A number of formation signs featured the King's (Tudor) crown. After the death of King George VI in February 1952, and the coronation of Queen Elizabeth II in June 1953, this was gradually replaced by the Queen's (Windsor) crown, most formation signs having been updated by the end of 1954. The 13th Infantry Brigade was a Western Australian based Citizen Military Forces (CMF) formation, originally comprising 11/44 Battalion (The City of Perth Regiment), and 16/28 Battalion (The Cameron Highlanders of Western Australia).