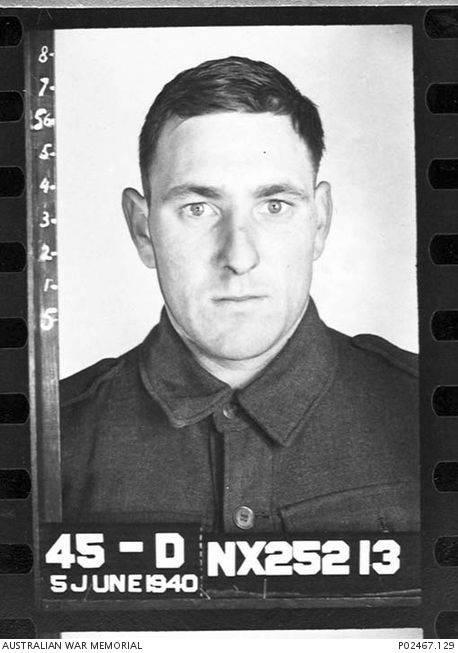 NSW. Paybook photograph, taken on enlistment, of NX25213 Corporal George William Colyer, 8th Divisional Provost Company, Australian Army Provost Corps. He was one of over 2000 Allied prisoners of war (POW) held in the Sandakan POW camp in north Borneo, having been transferred there from Singapore as a part of B Force. The 1494 POW's that made up B Force, were transported from Changi on 7 July 1942 on board the tramp ship Ubi Maru, arriving in Sandakan Harbour on 18 July 1942. Corporal Colyer, aged 31, died as a prisoner of the Japanese on 12 February 1945. He was the son of Jesse and Louisa Isabel Colyer, and the husband of Elsie May Colyer, of Nowra, NSW. He is commemorated on the Labuan Memorial Panel 30. (Photograph copied from AWM232, items 4 and 5. Personal information from the Commonwealth War Graves Commission Database.)