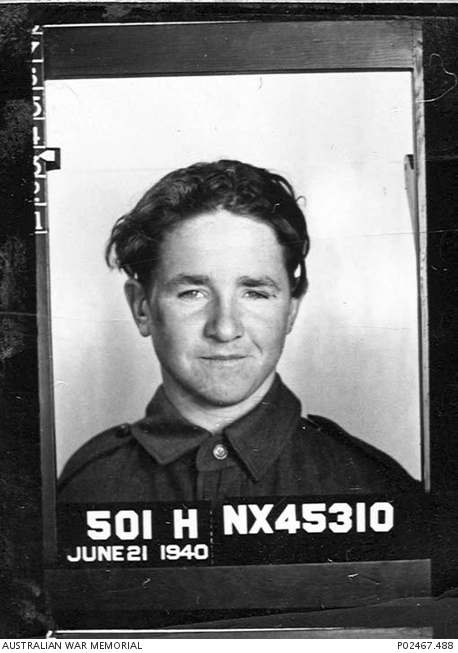 NSW. Paybook photograph, taken on enlistment, of NX45310 Private Spencer Anzac Nevil Burns, 2/20th Battalion, Australian Infantry. He was one of over 2000 Allied prisoners of war (POW) held in the Sandakan POW camp in north Borneo, having been transferred there from Singapore as a part of E Force. The 500 Australian and 500 British POW's who made up E Force, left Changi on 28 March 1943, on board the S.S. DeKlerk arriving at Berhala Island (adjacent to Sandakan Harbour) on 15 April 1943. The POW's were held there until 5 June, when they were taken by barge to Sandakan. The next day they were transferred to the 8 Mile Camp, which was about half a mile from the B Force compound. Private Burns, aged 20, died as a prisoner of the Japanese on 31 January 1945. He was the son of Walter Milus Burns and Amelia Emma Burns, of Wallsend, NSW. He is commemorated on the Labuan Memorial Panel 13. (Photograph copied from AWM232, items 4 and 5. Personal information from the Commonwealth War Graves Commission Database.)