Four unidentified Australian soldiers, prisoners of war (POWs) of the Japanese suffering from ... 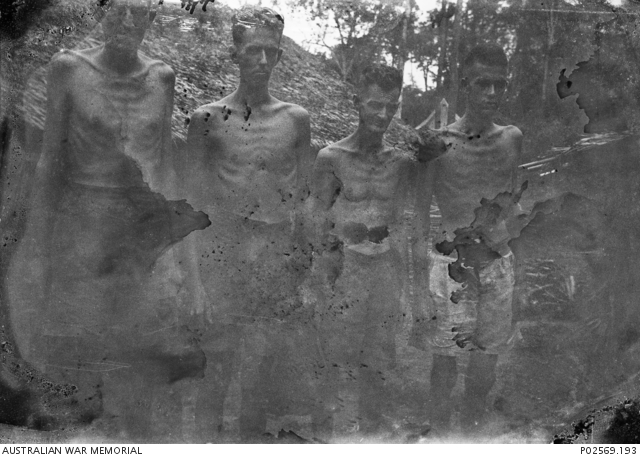 Four unidentified Australian soldiers, prisoners of war (POWs) of the Japanese suffering from severe malnutrition and beri-beri. These men were deemed fit for continued work on the Burma-Thailand railway. This negative features an image of 2 1/4 x 3 1/4 inches in size. It is one of 202 images relating to the service of NX37745 Private (Pte) George Aspinall from enlistment, his time as a Prisoner of War (POW) during the Second World War to his return to Singapore and Thailand post war. A motor mechanic from Parramatta, NSW, Pte Aspinall embarked with 2/30 Battalion on 29 July 1941. A prisoner of the Japanese after the fall of Singapore in February 1942, he was initially interned at the POW camp established at Changi gaol. In April 1943 he was assigned to Japanese prisoner group "F Force" to work on the Burma-Thailand Railway.

Whilst a POW, Pte Aspinall secretly photographed his experience with a folding Six-20 Kodak Brownie. Despite a strict ban against photography by POWs, Pte Aspinall took photographs at great risk to himself and other prisoners. He kept his camera hidden from Japanese guards in the pocket of a kidney-belt he created while in Changi and developed the photographic negatives in secret. Pte Aspinall returned to Changi from working on the Railway in 1944. In early 1945, on orders from his Commanding Officer, NX70416 Lieutenant Colonel Frederick Gallagher "Black Jack" Galleghan, 2/30th Battalion, Pte Aspinall hid his collection of negatives, along with other records, in a latrine bore-hole within the gaol compound. The majority of these were later returned to Pte Aspinall by "Black Jack" Galleghan at the end of the war.