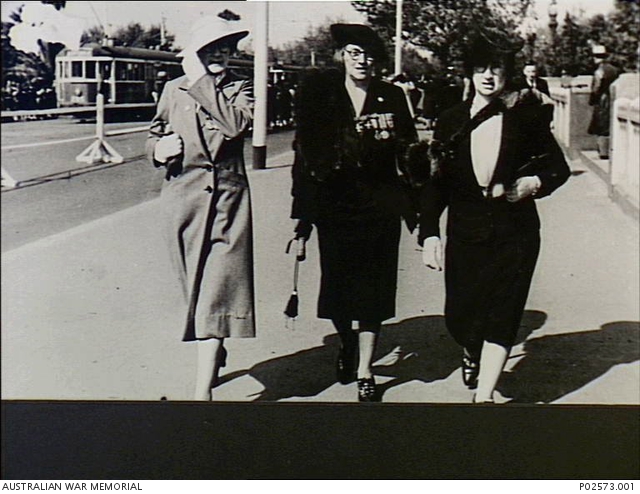 Melbourne, Vic. 25 April 1939. Informal portrait of three women walking down the footpath en route to the Anzac Day parade. At centre is Matron Mary McLean Loughron. The woman at left may be Sister Owen. Matron Loughron, born in Winchelsea, Vic, served as a nurse with the British Army in France in the Queen Alexandra Imperial Medical Nursing Service Reserve (QAIMNSR) from the beginning of 1915 to the end of the First World War, and immediately afterwards as Matron of the Peace Conference Hospital in Paris. As Staff Nurse Loughron, she was Mentioned in Despatches on 30 April 1916 for gallant and distinguished conduct in the field. In 1917, Matron Loughron received the Royal Red Cross (2nd class) medal and after the end of the First World War, the Royal Red Cross (1st Class) medal. (Donor C. Fenton)