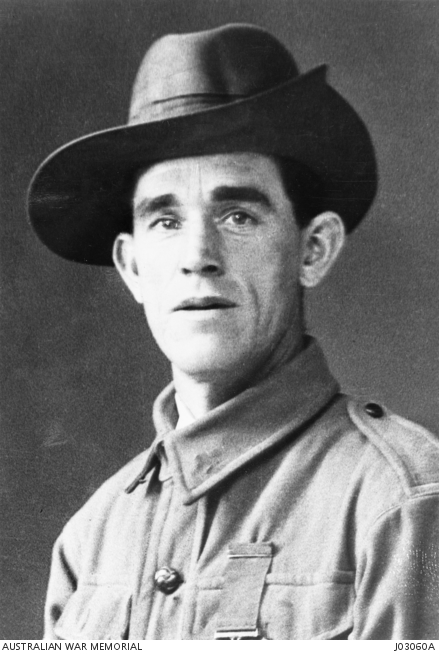 Studio portrait of 3399 Lance Corporal (LCpl) Thomas Leslie Axford, VC, 16 Infantry Battalion. LCpl Axford was awarded the Victoria Cross for "most conspicuous bravery and initiative during operations" on 4 July 1918 during the Battle of Hamel. When the barrage lifted and the infantry advance commenced, his platoon was able to reach the first enemy defence. The adjoining platoon were under heavy fire from enemy machine guns that inflicted many casualties, including the company commander. LCpl Axford, with great initiative and magnificent courage he threw his bombs amongst the machine guns crews, jumped into the trench and charged with his bayonet. Unaided, he killed ten of the enemy and took six prisoners. He then proceeded to throw the machine guns over the parapet. He then rejoined his own platoon and fought with it during the remainder of the operation. He had previously helped lay out the assault line tapes which, were less than 100 metres of the enemy. Axford returned to Australia in October 1918 and was discharged from the AIF on 6 June 1919.