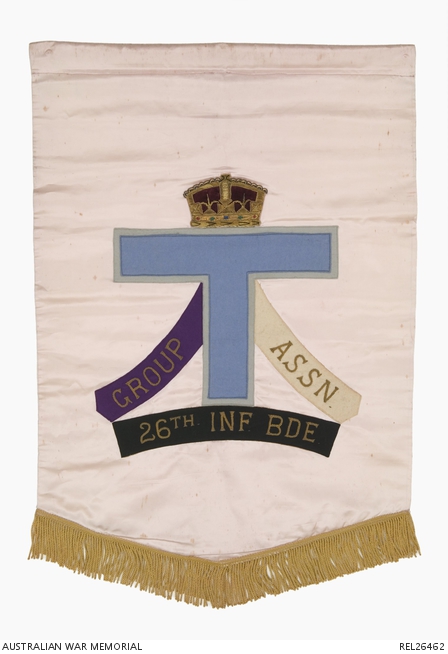 Pale pink satin banner with a triangular shaped base edged with a gold fringe. In the centre of the banner is a large light blue 'T' with a grey border surmounted with a king's crown made from bullion wire. Beneath the 'T' is a black banner embroidered with the words '26th INF.BDE.' in gold. To the proper right of the 'T' is a curved piece of mauve fabric with the word 'GROUP' and to the left a white piece of fabric with 'ASSN.'

This banner was made by Mrs Josephine Clare ('Jo') Leber. Jo was the wife of John Leber, a founding member of the 26 Infantry Brigade Group Association. On Anzac Day 1952, John arrived for the annual march bearing a new handmade banner for 2/23 Battalion, which Jo had made from her wedding dress. John had served with the battalion between April 1943 and July 1946 as Private NX161773, and the banner proved very popular amongst the other veterans present. When the 26 Inf Bde Group Association was formed later in 1952, Jo, an accomplished needlewoman, made them several other banners, including this example, which was presented to the Committee on 20 May 1958. In a letter of appreciation sent to Jo the next day, the President, Mr Roy Cooper, noted that "to give your own time and skill to producing a special banner for us is we feel something very fine indeed. You may be sure that the banner will be cherished as long as the Association exists and we all hope that will be a very long time indeed. Every time it is displayed we will be conscious of the gratitude we owe to you and John." The emblem displayed on the banner was designed by an artist working at the Art Gallery of New South Wales. The 'T' in the centre represents the Brigade Headquarters colour patch, the unique shape being worn by those units which had served in Tobruk during the siege in 1941. The black ribbon at the bottom is for 2/23 Battalion, the mauve for 2/24 Bn and the white for 2/48 Bn, each representing the individual battalions' colours. The banner was used by the Association at each Anzac Day march until 1997 when it was retired from service and presented to the Australian War Memorial along with a number of other banners belonging to the Group Association. Jo Leber died in January 1987.