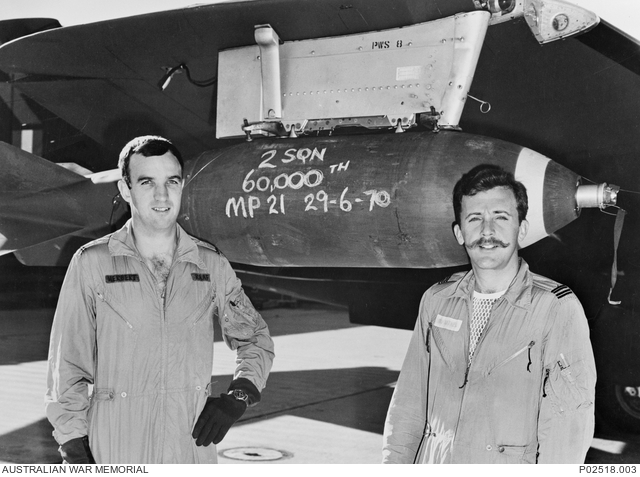 O44310 Flying Officer (FO) Michael Herbert, 2 Squadron RAAF (left), and his navigator, O219684 Flight Lieutenant (Flt Lt) Ronald William (Ron) Aitken (right). They are standing in front of an M117 US General Purpose Bomb, attached to the right wing hard point of Canberra bomber A84-241, flying as 'Magpie 21' (MP 21). The bomb is marked to commemorate the 60,000th bomb dropped by 2 Squadron in Vietnam. FO Herbert and his navigator, O119223 Pilot Officer (PO) Robert Charles Carver navigator, were the crew of a Canberra aircraft, number A84-231, which was lost on operations over Vietnam on 3 November 1970. Both men were posted missing in action, and were later presumed dead. Their remains were discovered in dense jungle near Vietnam's border with Laos in April 2009 and they were repatriated home.