Timothy W. Tovell with his adopted son Henri Heremene (Digger) Tovell who as a child had been the ... 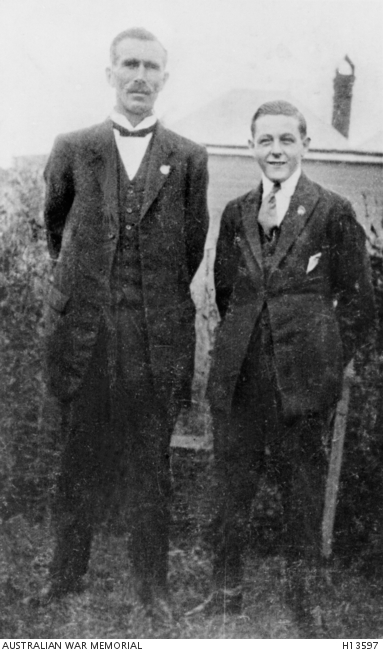 Timothy W. Tovell with his adopted son Henri Heremene (Digger) Tovell who as a child had been the mascot of No 4 Squadron, Australian Flying Corps. Tovell was an air mechanic with No 4 Squadron, AFC, when Henri (nicknamed Digger) was adopted as the squadron mascot after he walked into their Christmas dinner on 25 December 1918. Digger had been orphaned during 1914 and had been looked after by various British units before ending up with 4 Squadron. Pte Tovell looked after the boy and managed, by some devious means, to smuggle Digger to England and then to Australia when the Squadron was returned home. Tim Tovell adopted Digger in Queensland and brought him up until he became 18 when Digger moved to Melbourne to join the RAAF. As he could not be naturalised until he was 21 Digger worked as a civilian with the RAAF at Point Cook. On 23 May 1928 his motor cycle collided with a taxi and Henry Heremene (Digger) Tovell died the following day and was buried in Fawkner Cemetery. There is evidence of Henri signing his name as Honore, stating it is his real name. (Donor RSSILA Brisbane Sub-Branch)