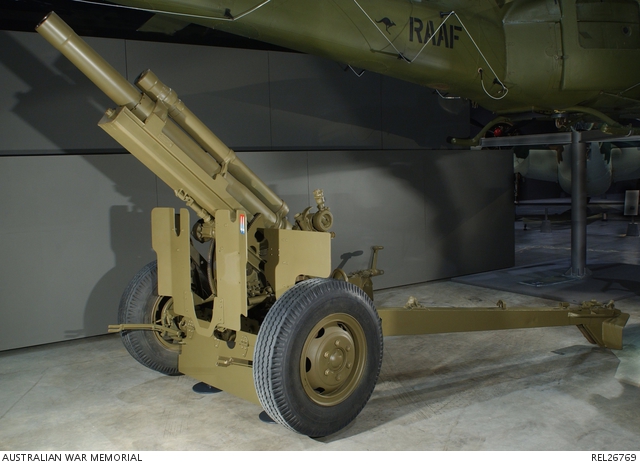 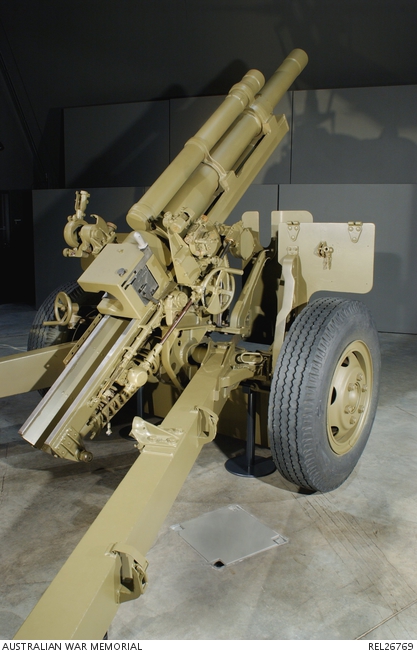 The M2A2 105 millimetre howitzer is a general purpose, towed, light field artillery weapon which consists of a barrel, recoil mechanism and carriage. The barrel consists of a tube assembly, breech ring, and locking ring. The barrel is mounted on a recoil sleigh assembly. The firing mechanism is a continuous pull (self cocking) type activated by pulling a lanyard. The cannon barrel is single-loaded, air-cooled and uses semi-fixed ammunition. The carriage is of the single axle and split trail type. The trails are divided during emplacement and are drawn together and locked during travel. A drawbar is provided for attachment to a prime mover. The carriage consists of an equilibrator, shield, elevating mechanism, cradle, gear, elevating arcs, traversing mechanism, top carriage, wheels, and trails. The recoil mechanism is a constant hydropneumatic type shock absorber system which is installed in the cradle of the carriage. The gun is painted olive drab. Markings - Tube number - 66869; Breech number - 25548; Recoil system number - 1549.

The M2A2 105 millimetre howitzer was the standard artillery weapon used by most field regiments of the Royal Australian Artillery (RAA) during the Vietnam conflict. This gun was used in the fire support role at Fire Support Base Coral, Bien Hoa Province, Vietnam in 1968. On the night of 12/13 May 1968 FSB Coral was attacked at about 3.30 am following a brief but intense rocket and mortar barrage. A mortar platoon position was over-run, along with this gun, number 6 of the 102 Field Battery, 12th Field Regiment, RAA. With the aid of extensive air support, the attack was beaten off and this gun was retaken. The gun had been damaged by a satchel charge by the North Vietnamese troops. Both tyres were destroyed, as well as damaging the shield resulting in the weapon being withdrawn for repair before being returned back to service. See AWM photograph P09295.001.