New Guinea. In honour of the liberation by Australian troops of some of their villages during ... 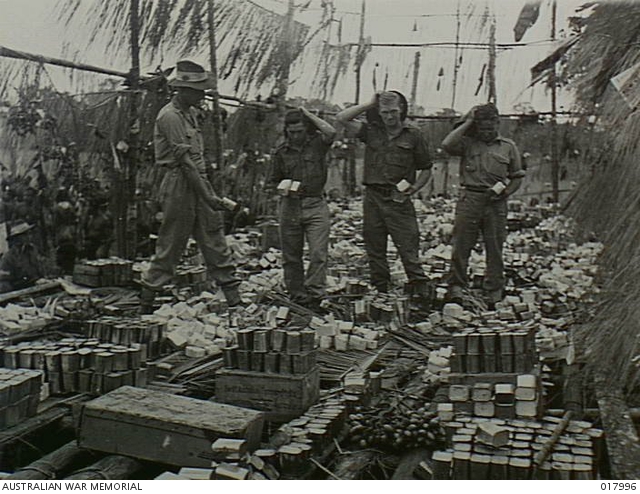 New Guinea. In honour of the liberation by Australian troops of some of their villages during 1944, and to offer a prayer for the forthcoming harvest year, New Guinea natives put on their ceremonial dress of paint and feathers, and danced for twenty four hours, ushering out the old year and welcoming the new. The celebrations were attended by thousands of Australian troops in a forward area in New Guinea. Festival stands were erected where food was cooked and distributed, after the ceremonies. 'A soldiers nightmare' these Aussies walk through thousands of tins of bully beef (bull-a-m'cow, to the natives) set out on the feast stand. Left to right: Lance Corporal Eric Shackle of Mosman; Private (Pte) Fred Harvey of Broken Hill, NSW; Pte Reg Roberts of Cracow, Qld; Sapper Cecil Fisher of Clarence River, NSW. One stack of tins are sitting on a box marked 'Swift Australian Company (Pty) Ltd Queensland Australia'.