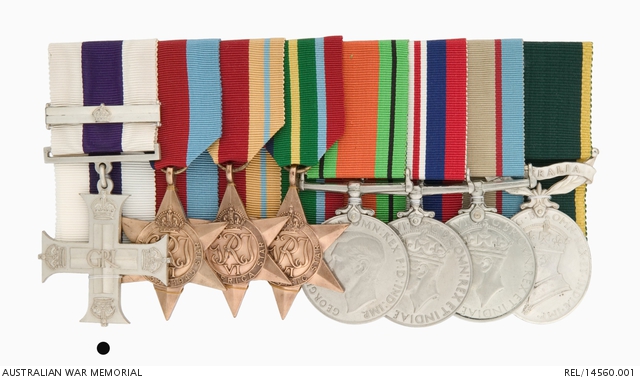 Linden Arthur 'Lin' Cameron was born at Warracknabeal, Victoria, in March 1918. He was working as a clerk, and serving with a local Militia unit, prior to enlisting the AIF in November 1939. He joined 2/5 Infantry Battalion with the service number VX3347, and was commissioned in the same unit in March 1941, serving throughout the campaigns in Libya, Greece and Syria before returning to Australia in July 1942. In New Guinea, he initially led 10 Platoon of D Company, and later, with the rank of captain, became company commander. Cameron was awarded the Military Cross following an action on 8 February 1943 at Crystal Creek, in the Wau-Salamaua area. In 1945, for his courage and leadership of D Company at Perembil, in the Aitape-Wewak region, he was awarded a Bar to the Military Cross, becoming one of only 16 Australians to receive the MC twice during the Second World War. He remained in the Army post-war, eventually taking his discharge in 1948. Lin Cameron died at his home at Dunkeld, Victoria, in March 1986. At the time of his death, he had been contributing to the production of 2/5 Battalion’s history ‘All the King’s Enemies’, which was published in 1988. The citation for the MC reads as follows: ‘Date:- 8 Feb 43. Place:- CRYSTAL CREEK. Two enemy MMG's in position on a high ridge had prevented the advance of B Coy whose task was to advance to, and clear the area up to CRYSTAL CREEK. These enemy guns commanded the approach along the track and could not be neutralised from the posn gained on the previous day's operations, being entirely hidden from that position. Mortar fire was brought to bear on the areas, but Lieut CAMERON found that although one gun had been neutralised, other guns were still firing with effect. In the face of heavy enemy MMG and grenade fire, and without calling for further Mortar support, Lieut CAMERON led his men up a very steep slope right into the centre of the enemy posns. He directed the attack on to both guns and personally shot ten of the enemy with his rifle. As a result of these enemy guns being neutralised the ridge was captured and was of the greatest value in the ultimate success in the clearing of the whole of the CRYSTAL CREEK area. Without it, it would have been impossible to forward supplies to part of our forces who had previously been cut off by the enemy and had been held up in operations through lack of supplies.’ The citation for the Bar to the MC reads as follows: ‘For outstanding leadership and personal courage when in Command of a Coy at PEREMBIL on 3 Jan 45. The 2/5 Aust Inf Bn, ordered to move Eastwards towards the MAPRIK area found its advance barred by a strong enemy position on a dominating razor-back ridge at PEREBIL. Approach was extremely difficult and the final assault involved movement up a precipitous hill face. Vital to the success of the future operations, PEREMBIL had to be captured and CAMERON's Company was ordered to secure it. After quick and skilful planning, Capt. CAMERON led his Company in the assault, drove the enemy out of PEREMBIL and immediately consolidated the newly-won ground. During the night and day that followed, the enemy repeatedly counter attacked but due to CAMERON's cool and courageous handling of the situation, these attacks were repulsed with heavy loss to the enemy. Throughout the whole action, CAMERON personally controlled and directed his men with great skill, and his fearless example and encouragement to his men, particularly during the strong enemy counter attacks, was an inspiration to all. The successful accomplishment of the task allotted him exercised a definite influence on the subsequent operations.’