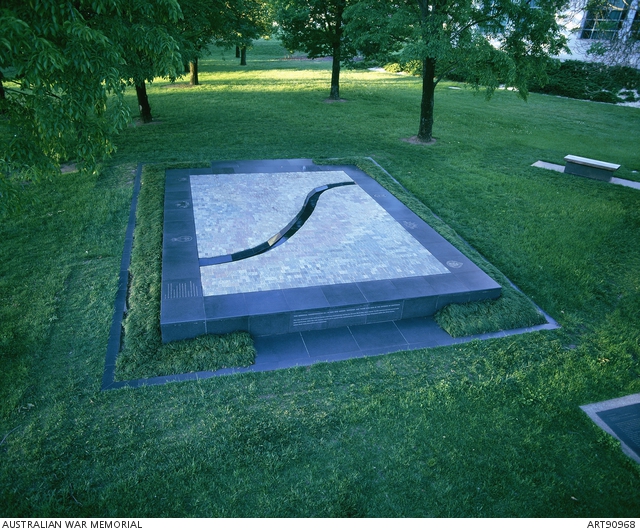 Whereas more conventional war memorials may incorporate a cenotaph or a representative figure, Anne Ferguson has created a bare platform of coloured stones, divided in two by a curved trench that resembles an aerial view of a river, carving its way through a sparse, flat landscape. While most memorials encourage audiences to keep a reverential distance, to stand outside the experience of war and reflect upon it, Ferguson wants the viewer to walk right into the middle of the work, to experience a sense of empathy with the women it celebrates. The insignia of the women's services are displayed discreetly around the mosaic, because for Ferguson, ceremony is far less important than the human dimension. For many women, the work they undertook during the Second World War provided a first taste of freedom and responsibility. When the war ended and those jobs were given back to the men, it must have come as a bitter blow, because their lives and way of thinking had already been changed. It is this sense of metamorphosis that Ferguson has tried to capture in her stone mosaic, in which the variegated colours represent the different lives, the different backgrounds and experiences of servicewomen. Set in a peaceful grove between the deciduous trees, the sculpture changes the appearance in relation to the changes in daylight, the play of shadows, and the sprinkling of leaves that fall haphazardly onto the stone. Ferguson draws a parallel between the gradual process of awakening to the environment in which we live, and a growing recognition of the debt we owe to those men and women who gave their time, and their lives, in defence of this land. Her stone platform may be undemonstrative, but it has a feeling of underlying strength. It is a foundation upon which new recognitions can be built.