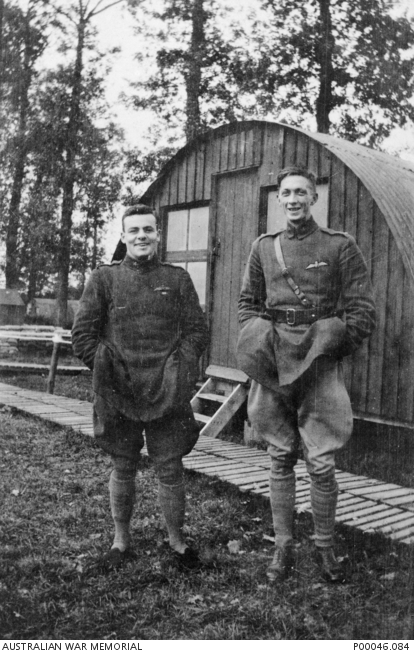 France. 1917. Australian pilots serving with the Royal Flying Corps (RFC), Raymond James Brownell (left) and Cedric Ernest Howell (right), stand outside a hut at an unidentified airfield in France. Brownell was awarded the Military Medal (MM) for action while serving with the AIF and in late 1916 he transferred to the RFC. By the end of the First World War he was awarded a Military Cross (MC) and was a noted air ace with twelve victories. Brownell continued a career in the Royal Australian Air Force (RAAF) and retired in 1947 with the rank of Air Commodore. Howell transferred from 46th Battalion AIF to the RFC In November 1916. By the end of the war he was an ace with nineteen confirmed victories. He died on the 9 December 1919 when his aircraft crashed into the sea during the England-Australia Air Race.