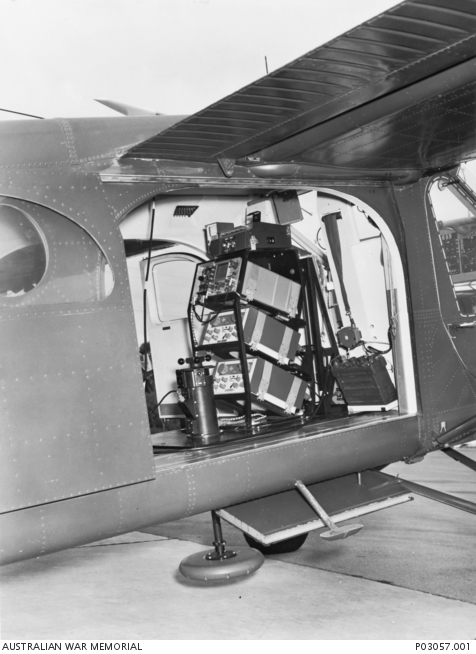 This brand new Pilatus PC-6 Turbo Porter aircraft (flown by army pilots of 161 Reconnaissance Flight (161 Recce Flight, attached to 547 Signal Troop, South Vietnam) has been fitted out with Aerial Direction Finding Equipment (ADFE). Fitted into the lower section of the frame are two identical, Collins 51-J4 high frequency receiver sets used to eavesdrop on and intercept enemy wireless transmissions. The set above has been fitted with a cathode ray tube and appears to be used to identify enemy band lengths and frequencies. The top unit appears to be an AKAI X-V reel to reel tape recorder used to record enemy transmissions. The small set attached to the bulkhead just inside the doorway (right) is an AN/PRC 25 wireless set, used to communicate with friendly ground troops. There is also a lookdown/side scan radar device fitted to and extending through the floor of the aircraft (left) which is possibly used as an electronic sniffer for detecting enemy movements and activities at night.