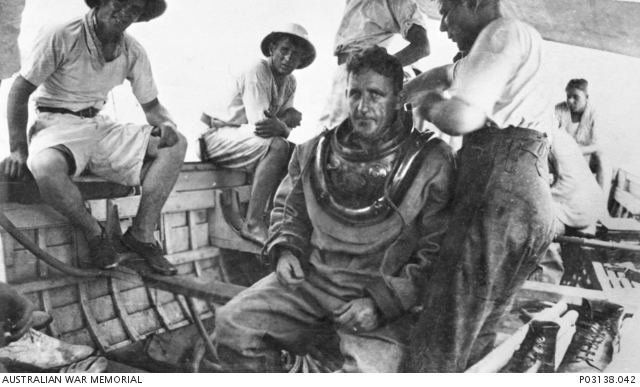 An informal outdoors portrait of 12040 William Bailey ‘Dave’ Spencer, RAN, of Alphington, Vic, sitting in a shallow boat whilst another RAN member adjusts his deep sea diving suit. William Spencer enlisted in the RAN on 2 February 1920 aged 14 and one half years, and spent a total of 32 years with the service including the Second World War. On enlistment he served with HMAS Tingira at the RAN Recruitment Training School until he turned 18 years. In 1925 he qualified as a naval diver on RAN ships including HMAS Adelaide, Canberra, Cerberos, Penguin and Lonsdale. During the Second World War he was part of the RAN’s efforts to salvage mini submarines from Sydney Harbour. He was discharged on 30 January 1946.