Port quarter view of the N Class Destroyer HMAS Nestor, one of the five ships of this class which ... 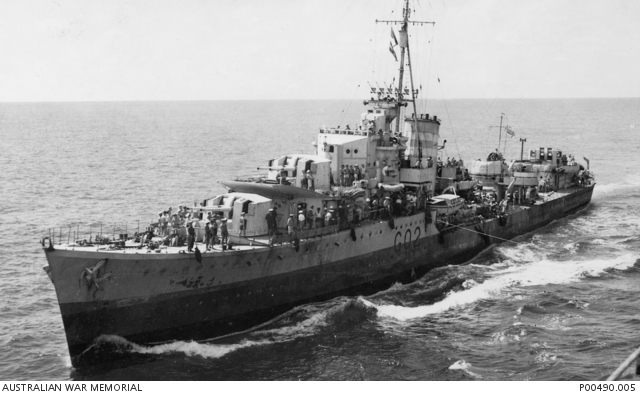 Port quarter view of the N Class Destroyer HMAS Nestor, one of the five ships of this class which served in the Royal Australian Navy during the Second World War. Commissioned in February 1941, Nestor was attached to the Home Fleet and was engaged in convoy escort and patrol duties. She was with the escort for HM Ships Victorious and King George during the hunt for the German Battleship Bismarck but was short of fuel and was diverted to Iceland for refuelling. As a result Nestor was not present when Bismarck was sunk in the North Atlantic on 29 May 1941. During subsequent convoy in the Mediterranean escort duties, Nestor sighted the German V-Boat U127 and in a depth-charge attack destroyed the submarine with the sinking officially credited. Then followed duty with the Eastern Fleet in the Indian Ocean before being ordered back to the Mediterranean. Nestor then became part of the powerful escort for a Malta-bound convoy. As a result of a convoy from Gibraltar reaching Malta, Nestor's convoy was ordered back to the Alexandria and on the way was subject to intense air attacks during which Nestor was straddled by bombs and severely damaged and sunk by an accompanying destroyer. Nestor was the only major ship in the RAN never to visit Australia.