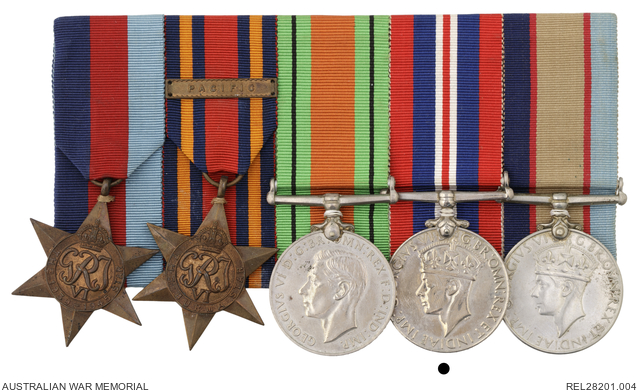 Born in 1923, Maxwell Colin Plummer was working as a farm hand in South Australia when he joined the RAN, as part of the permanent naval force, on 7 May 1940. Assigned the service number 24306, he joined the light cruiser HMAS Adelaide as an ordinary seaman in March 1941, after completing his basic training at Flinders Naval Depot.

In October Plummer was sent to Singapore to join the crew of the destroyer HMAS Vampire as she was completing her refit in the dockyards there. The ship completed sea trials at the end of November. At the beginning of December the British battleships Prince of Wales and Repulse arrived in Singapore and Vampire was detailed as one of their three escorting destroyer. On 8 December the ships left Singapore in an attempt to interrupt the Japanese invasion of Malaya. both battleships were sunk in the South China Sea by the Japanese on 10 December. Vampire rescued 9 officers, 215 ratings and a civilian and transported them to Singapore. Plummer was promoted able seaman on 18 December. For the rest of December and the first three weeks of January 1942 Vampire escorted shipping convoys in and out of Singapore.

On 26 January, together with the destroyer HMS Thanet, Vampire sailed to attack Japanese transports 80 miles north of Singapore but found them protected by a Japanese cruiser and six destroyers. Outnumbered, Thanet and Vampire retired but were attacked and the Thanet sunk. Vampire returned to Singapore unscathed and after the fall of the island to the Japanese was sent to Ceylon (Sri Lanka) to escort and screen the aircraft carrier HMS Hermes. Both ships were attacked and sunk off Batticaloa by the Japanese on 9 April; Vampire lost her captain and eight ratings. Plummer was wearing this life belt when he was rescued by the hospital ship Vita.

Plummer's subsequent service was spent in Australian waters, in the auxiliary mine-sweeper HMAS Doomba, and in HMAS Kookaburra in boom defence in Darwin. He was discharged from the RAN on 12 August 1945, when it was noted that he had lost the top joint of his left index finger during his service and was suffering from 'anxiety'. Plummer died in 2000.