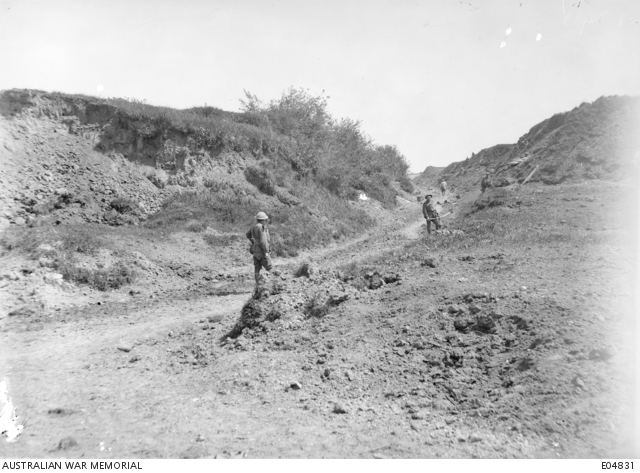 Near Ville-sur-Ancre, France. 20 May 1918. Australians of the 21st Battalion standing in the entrance to the `Big Caterpillar', near Ville-sur-Ancre. The `Big' and `Little Caterpillars', so called from their marking on the maps, were strongly held sunken roads near Ville-sur-Ancre, which troops of the 6th Infantry Brigade took after sharp fighting in the capture of Ville-sur-Ancre on 19 May 1918. The Boche (Germans) had the sides of this cutting honeycombed with small dugouts and bivvies. The attack on the position was launched in the dark (2 a.m.) and the enemy completely surprised. Many were killed in their dugouts. It was in this caterpillar that Sergeant (Sgt) William Ruthven, 22nd Battalion, performed the series of remarkable feats that gained him the Victoria Cross. Sgt Ruthven was one of the first into the caterpillar and not only killed many Germans but captured over thirty prisoners. When the barrage advanced from this objective the `waves' which, had been reorganising under cover of the cutting, pushed on again and Sgt Ruthven mopped up a troublesome machine gun post. In the caterpillar are the graves of several men of the Brigade.