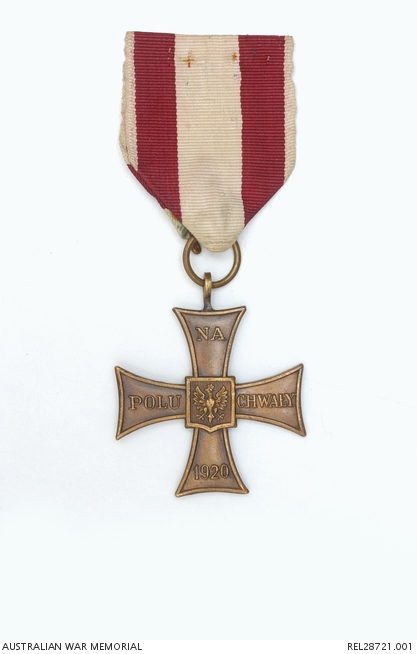 Polish Cross of Valour. Awarded for outstanding acts of valour. Eagle in centre of obverse with the words 'NA POLU CHWALY' and date '1920'. This date refers to the first issue of the award. The reverse shows a sword and wreath with the word 'WALECZNYM'. The cross is worn on a white silk ribbon with two crimson stripes.

Awarded to Polish serviceman, Lieutenant Nicholas Nikon, who served in the Polish Army and was interned by the Soviet Peoples Commissariat of Internal Affairs (NKVD) in 1939. After his release from internment in 1941, he served in the Middle East with 3 Karpathian Rifle Division (3 Dywizia Strelcow Karpackich or 3 DSK) and fought in Italy at the battle for Monte Cassino in May 1944.