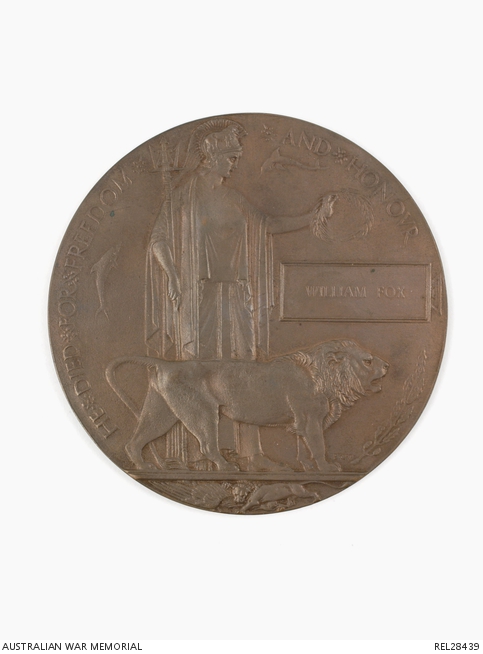 Bronze next of kin plaque, showing on the obverse, Britannia holding a laurel wreath, the British lion, dolphins, a spray of oak leaves and the words 'HE DIED FOR FREEDOM AND HONOUR' around the edge. Beneath the main figures, the British lion defeats the German eagle. The initials 'ECP', for the designer Edward Carter Preston appear above the lion's right forepaw. A raised rectangle above the lion's head bears the name 'WILLIAM FOX'.

Born in Kelso, Scotland in 1882, William Fox had served for 12 years in the Royal Marine Light Infantry before he emigrated to Sydney in 1909, together with two of his siblings. Fox enlisted in the AIF on 18 July 1915 describing himself a labourer, when he was in fact employed as an ammunition worker at Spectacle Island in Sydney Harbour, supplying ammunition for the navy.

After initial training Fox was posted a private, service number 579, to C Company of the newly raised 30th Battalion. The battalion sailed from Sydney on 9 November aboard HMAT A72 Beltana. After training in Egypt the unit arrived in France for service on the Western Front in June 1916. Fox was promoted sergeant at the beginning of August but was reduced to the rank of private the following January after a drunken episode. He was killed in action At Abeele near Poperinghe, Belgium on 19 September, aged 35. Fox's body was not recovered for burial in a military cemetery after the war and his name is commemorated on the Menin Gate Memorial at Ypres.

This plaque was sent to his brother, Robert, who had served in the Royal Australian Navy during the war, in October 1922.