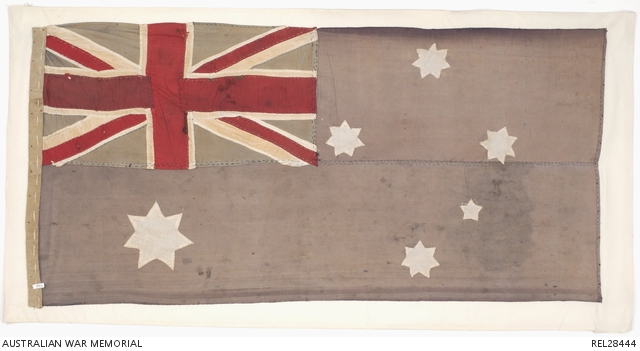 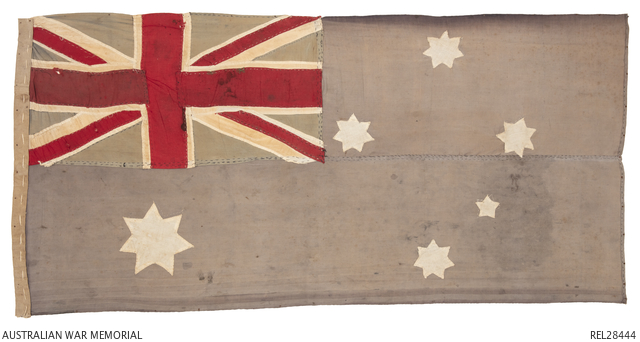 Handmade blue cotton Australian ensign with a lightweight canvas hoist. The blue section is made from two pieces of fabric joined horizontally across the flag. The Federation Star and stars of the Southern Cross have been cut from a fine white cotton handkerchief. The Union flag in the upper left canton has been made and applied separately from the same blue fabric, seven strips of red fabric and strips of white cotton, also cut from a handkerchief. Some of the original handkerchief hems are still present. All stitching is in running stitch, using white and black cotton. The lightweight canvas hoist is held in place with a double strand of cotton twine in running stitch.

This flag is said to be the first Australian flag to be flown in Thailand after the capitulation of the Japanese in August 1945. Amongst the prisoners of war in Japanese hands were Gunners NX36861 William (Bill) Thomas Palmer and NX36853 William (Bill) Edwin Dircks. Although the Japanese had surrendered on 15 August 1945, news did not reach the jungle camps until 6.00 pm on 18 August 1945. At reveille on the morning of 19 August this flag was flying on a flagpole, complete with yardarms and halyards much to the surprise of the camp and especially the Japanese.

The material the prisoners used for the blue of the flag's ground was taken from the bottom of a Japanese mosquito net, which had a wide band of about 18 inches of blue material around it, the red came from the lining of a Dutch straw hat, blue in the Union Jack was obtained from an army signal flag, which was being used as a patch on a prisoner's shirt, and the white material came from the only known silk handkerchief in the compound. For thread the two men unpicked pieces of canvas from an old army kit bag. The whole of the stitching was done with wire needles, ground to a point at one end, and an eye punched in the other end with a bamboo spike. The flag was almost finished at about 3.00 am, working by improvised lamps using coconut oil when Bill Palmer and a couple of friends decided to spend the remainder of the night in erecting a flag pole made from the largest and straightest piece bamboo available (about 40 feet long and 6 inches through the butt). Bill Dircks with another couple of friends, continued on with the making of the flag.

Palmer and Dircks had met before the war when both were members of the 1st Guildford Scout Troop in outer Sydney. Both men enlisted in the AIF on 18 June 1941 and both were assigned as gunners to 2/1 Heavy Battery. The battery was one of the supporting units sent with Sparrow Force to Timor. Members of the battery were captured in 1942, most being sent to Singapore and then on to labour on the Burma Thai Railway.