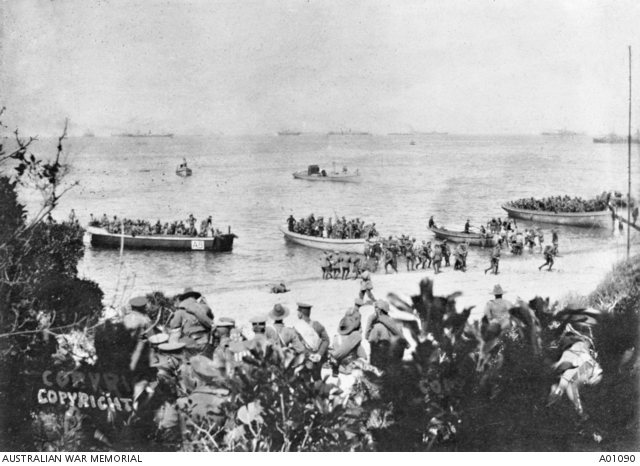 Part of the 4th Battalion and the mules for the 26th (Jacob's) Indian Mountain Battery landing at 8 am. In the foreground is the staff of Colonel Henry Normand MacLaurin, 1st Infantry Brigade, of Sydney, who was killed in action on 27 April 1915. The officer with the rolled greatcoat over his shoulder is Major Francis Duncan Irvine, later Major Brigade Major, of Sydney, who was also killed on 27 April 1915. Nearer the water's edge (centre) is Captain Dennis Malcolm King, DSO, MC, Orderly Officer, later Major. The officer on the left, with his chinstrap down, is Lieutenant R G Hamilton, the Brigade Signal Officer. At the water's edge lies an Australian engineer, Sapper R Reynolds, the first to fall during the war. Transports can be seen in the background and two of the warships' steamboats are in the middle distance. The photograph was taken by Lance Corporal Arthur Robert Henry Joyner of 1st Division Signal Company, of Paddington NSW, who was later killed in action at Bazentin, France on 4 December, 1916.