To shove loads of supplies out of a RAAF Douglas C47 Dakota transport aircraft, widely known as ... 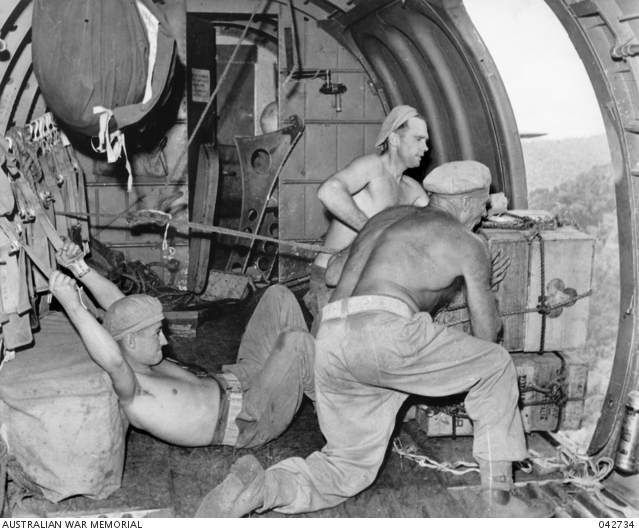 To shove loads of supplies out of a RAAF Douglas C47 Dakota transport aircraft, widely known as the biscuit bomber, Private Ted Rowell of Sydney, NSW, lies on his back and doubles his legs behind the load, to more easily apply pressure at the right moment. It takes three men to shift a heavy load, the other two being Q46120 Leonard John Willis, and Sergeant Harry Maurice Whaling of Sydney, NSW. They are all of 2/160 Australian Supply Depot Platoon. Note Whaling's rubber boots, worn by crew members to prevent them from slipping on the floor of the aircraft. Sgt Whaling was killed in an accident on 17 February 1945. Photographed for a pictorial article called "Biscuit bombing", believed to have been published in the Women's Weekly.