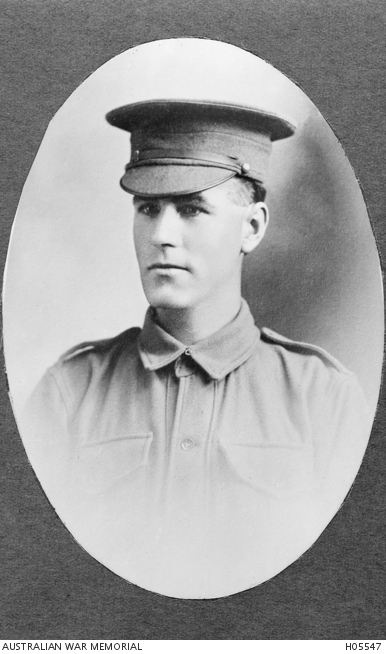 Studio portrait of 189 Gunner Campbell Login Harrison, 12th Field Artillery Brigade from Sale, Victoria. A 33 year old fruit grower prior to enlisting on 27 March 1915, he embarked for overseas as an Able Seaman Driver with the 1st Royal Australian Naval Bridging Train from Melbourne on 4 June 1915 aboard HMAT Port Macquarie. The Bridging Train landed at Suvla Bay, Gallipoli on 8 August 1915 and remained there until evacuated in December 1915. Driver Harrison transferred to the 47th Battery of the 12th Field Artillery Brigade on 6 April 1916 and served with them on the Western Front. After being wounded in action near Armentieres, France on 24 June 1916, he died later that day and is buried in Brewery Orchard Cemetery, Bois-Grenier, France.