Group portrait of five officers of the 1st Division Signal Company outside the headquarters ... 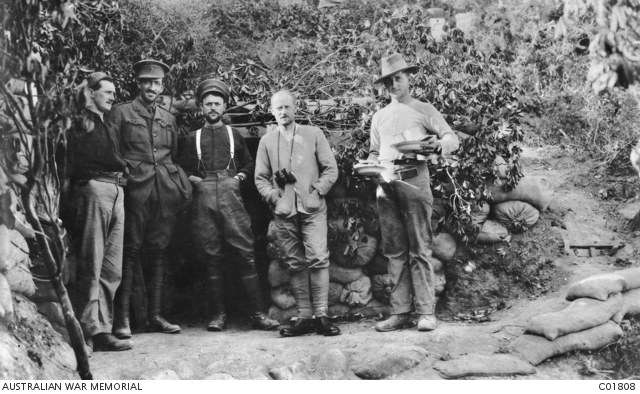 Group portrait of five officers of the 1st Division Signal Company outside the headquarters signal section dugout at Anzac Cove. The officers said that they would not shave until they reached Constantinople but they recanted on the vow after several weeks, when the prospect of a forward move disappeared. Identified left to right: Company Sergeant Major Thomas (Tommy) Deam (later promoted to the rank of Second Lieutenant and was awarded a Military Cross and Bar); Major Henry Llewellyn Mackworth, Commanding Officer; Lieutenant (Lt) Stanley Holm Watson, (after whom the pier was named); Lt Grosvenor George Gordon (later Major and awarded a Distinguished Service Order), wearing a pair of binoculars around his neck; unidentified batman.