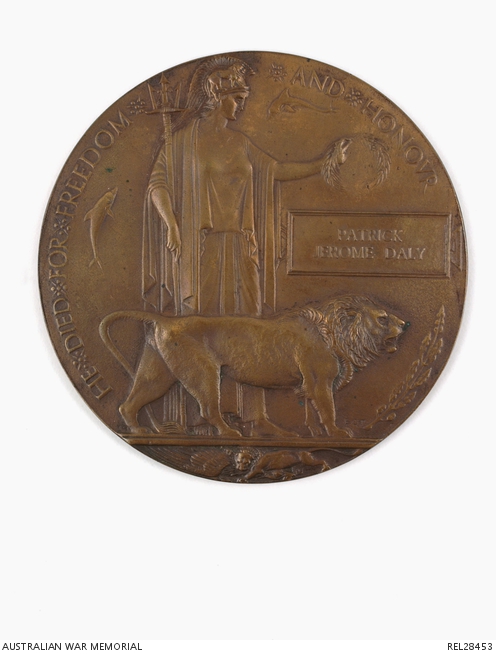 Bronze next of kin plaque, showing on the obverse, Britannia holding a laurel wreath, the British lion, dolphins, a spray of oak leaves and the words 'HE DIED FOR FREEDOM AND HONOUR' around the edge. Beneath the main figures, the British lion defeats the German eagle. The initials 'ECP', for the designer Edward Carter Preston appear above the lion's right forepaw. A raised rectangle above the lion's head bears the name 'PATRICK JEROME DALY'.

Born in Richmond, Victoria, Patrick Jerome Daly had completed two years of a boiler making apprenticeship but was working as a labourer when he enlisted in the AIF in Liverpool, New South Wales on 23 February 1915, aged 23. After basic training he was posted as a private, service number 1178, to D company, 17th Battalion. He embarked for overseas service from Sydney, aboard HMAT A32 Themistocles, in May.

Arriving in Egypt in mid-June, the battalion undertook further training there until mid-August. It landed at Gallipoli on 20 August, and returned to Egypt in January 1916. The battalion arrived in France for service on the Western Front at the end of March. In June Daly transferred to the battalion's bomb (grenade) platoon. He took part in a successful raid on enemy trenches on the night of 25-26 June. Daly was wounded as Pozieres on 28 July, receiving gun shot wounds to his scalp and buttocks, and was evacuated to England for hospital treatment. a period of leave, hospitalisation for an unrelated illness, and further training meant that he did not rejoin his battalion in France until March 1917.

Daly, by now promoted to lance corporal, was killed on 9 October 1917 during the battle for Broodseinde Ridge in Belgium, part of the wider Third Battle of Ypres, on a day when his battalion suffered 272 casualties. Originally noted as being buried 'near Broodseinde' his body was re-located after the war and is now buried in the Buttes New British Cemetery at Polygon Wood.

This commemorative plaque was sent to Daly's father, John, in October 1922.