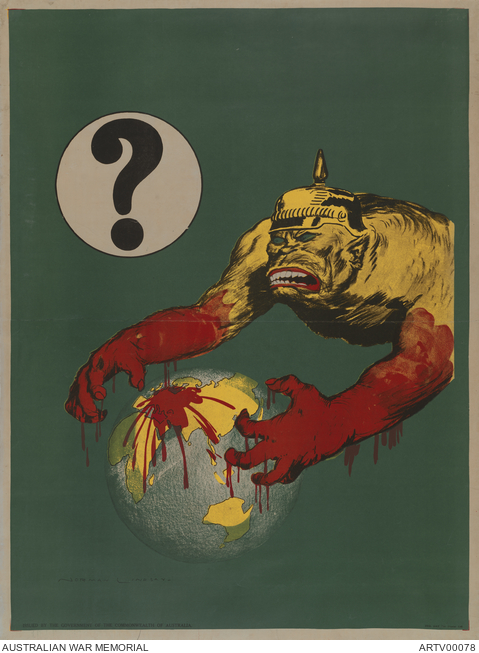 Poster depicts a German ogre, his blood-covered hands and forearms clutching at a globe of the world. Blood pours over Europe, and slowly oozes towards other countries, demonstrating the threat of the German menace and the need to contain it. The first of a series of posters drawn by Norman Lindsay for the last of the nation-wide Australian recruiting campaign in 1918, '?' constitutes one of the rare examples in war poster art produced without a letterpress. An excellent instance of the crude caricature and vilification of the enemy, and in keeping with Lindsay's portrayal of 'the Hun' in his many cartoons for the 'Sydney 'Bulletin' at the time. '?' was distributed surreptitiously, and pasted up throughout Australia on a designated night. The design, also known as 'The Ogre' or 'German Monster', appeared on one of the leaflets issued in conjunction with the six posters. Here, the Ogre reappears in a standing position above the caption 'The Thing We Fight'. The appearance of '?' provoked some protest in parliament, and the Minister for Recruiting, R. B. Orchard, considered withdrawing it in October 1918. However, previous to this, (in early 1918), Orchard had gathered together Lindsay's posters as part of a 'Recruitment kit', which included a film made using Lindsay's German monster, and also letters inveighing the reader to join. The kit, which included Lindsay's posters, film, letters calling for recruits,and instructions for the rural and metropolitan press, represent a sophisticated and targeted mass media engagement with the populace. Norman Lindsay (1879-1969) was a painter, draughtsman, illustrator, cartoonist, printmaker, writer and sculptor. He joined the Sydney 'Bulletin' magazine as a staff artist, 1901-09, 1910-23 and 1932-58. During the First World War he produced jingoistic cartoons and pro-conscription posters.