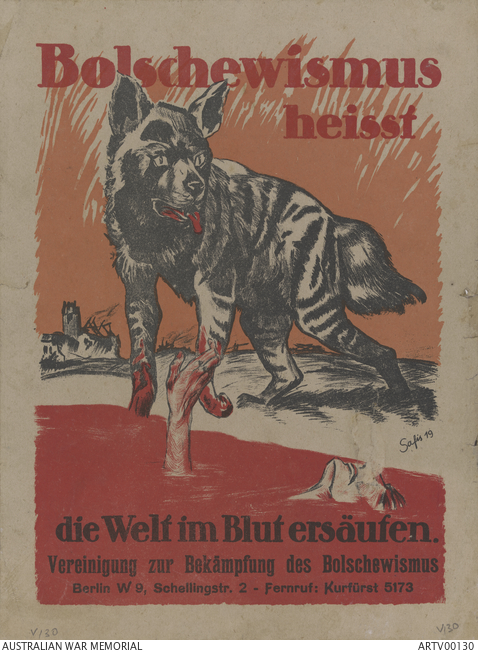 German anti-Bolshevik propaganda poster depicting a Russian wolf standing over a figure submerged in a pool of blood. In translation the poster states: 'Bolshevism means the world will drown in blood'. A destroyed city is seen in the background. The poster provides a context for social, cultural, emotional and political situations in Germany during and after the First World War. It also provides an insight into the way war was viewed and experienced by the German nation, and of German war propaganda and the chaotic period immediately following the first World War when a struggle for the rights of the German people began between the radical Communists on the left and the strident anti-Bolsheviks on the right. The 1919 campaign for the National Assembly stimulated propagandists on both the Right and the Left, which manifested itself in a classic battle of slogans and images plastered to the walls of German cities. Generally expressionist in style, these propaganda posters are hard-hitting,often brutal, political documents, most created for the hard-fought and pivotal 1919 campaign for the National Assembly. On one side, the proletariat created posters calling for a restoration of order in the streets and, on the other, posters called for revolution. Similar in style, the propagandists produced posters that are purposefully crude, dark and expressionistic. Each poster tackles the problems of hunger, unemployment and exploitation left in the wake of the War with the intent to capture the hearts and minds of a divided and conquered German public. Johannes Safis was a poster artist and graphic designer. He came to prominance in 1919 and is last mentioned in 1928. During the 1920s he was a successful poster designer.