Would you stand by while a bushfire raged? 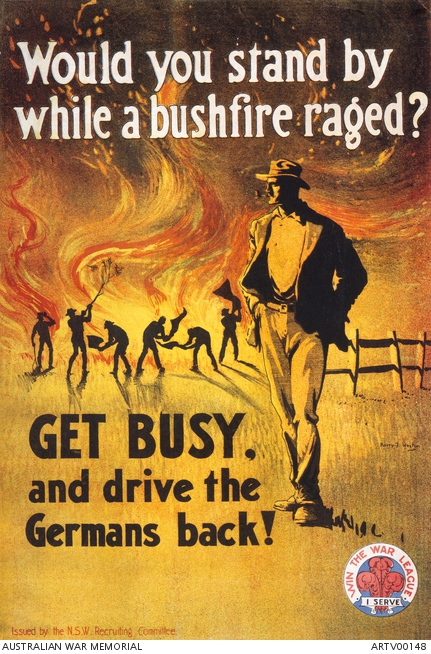 First World War recruiting poster depicting a 'Cornstalk' or typical farmer in the foreground, calmly walking away from a scene in which men are desperately attempting to try and extinguish a grass fire. The poster was produced by the Win the War League in conjunction with the New South Wales Recruiting Committee.

Cheap, easy to mass-produce and highly visible, Australian First World War propaganda posters were created at the commencement of the war by state recruiting committees together with volunteer organisations such as the Win the War League. Later in the war posters were issued by the Federal government. This poster was released at the same time as another Weston poster, titled, 'Which picture would your father like to show his friends?'

Harry John Weston (b.1874, Tasmania) was a cartoonist and commercial artist. He worked as a sailor, store-clerk and lithographer before taking up teaching in northern Tasmania. He then traveled to Victoria where he established his own business as a commercial artist in Melbourne. By 1903 he had established himself as a leading poster artist. He also worked in Sydney and had previously designed posters with Blamire Young and Lionel Lindsay around 1893. He was a member of the Prehistoric Order of the Cannibals Club 1893 and is best remembered for his old salts and waterfront characters and as a contributor to 'The Bulletin', where he worked as an illustrator in the Advertising Department. In 1924 he became a member of the world's first society of cartoonists, the Black and White Artists' Society, formed in Sydney. His poster style sought to convey 'something typically Australian- something that conveys some meaning to an Australian...[with ] a simple and broad treatment'.