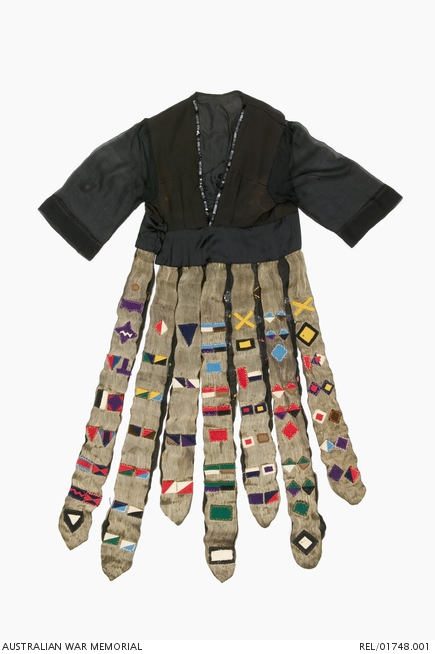 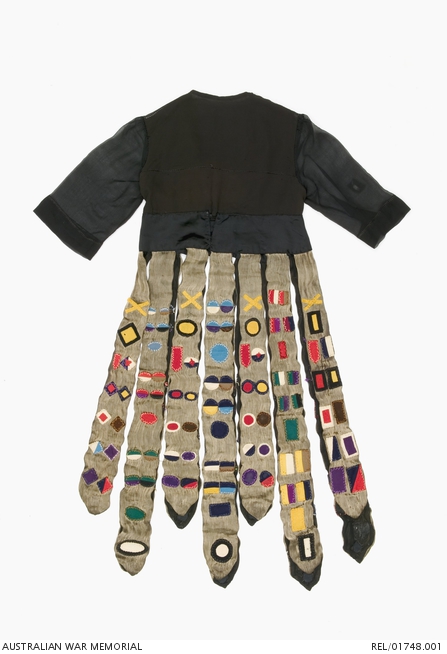 Over-dress with black satin and black crepe bodice with loose three-quarter sleeves, and a v-neck edged with jet beads and sequins. Eleven narrow gold satin panels of uneven lengths, each finishing in a point, are attached around the waist. A wide range of AIF unit colour patches have been appliqued to the streamers with herringbone stitch.

This fancy dress costume was made by three double amputees, 4439 Private Malcolm Brown 47 Battalion, 22 Private Joseph Allen Baillie 35 Battalion and 2176 Private Frederick Trice 4 Pioneer Battalion while at 2 Australian Auxiliary Hospital (2AAH) in Southall, London. It is thought to have been made between November 1918 and January 1919, but the exact date is unknown.

2AAH originally began as an auxiliary hospital to accept the excess patients from 1 Australian Auxiliary Hospital at Harefield. In 1916 its purpose changed and it was made a specialist hospital for fitting artificial limbs and caring for amputees.

Malcolm Brown was admitted to 2 AAH in June 1917. He had received wounds to his head, feet and right arm on 18 January 1917. At Birmingham War Hospital he had both feet amputated on 7 February. He was transferred to 1AAH in May, before finally being admitted to 2AAH. Brown was born in South Brisbane, Queensland in 1894. He had been working as a plumber before he enlisted on 29 August 1915. He embarked with 15 Battalion on 31 January 1916 from Brisbane on board HMAT Wandilla. He was later taken on strength of 47 Battalion in April 1916. Brown spent much of 1918 and the early part of 1919 at 2AAH, aside from a few periods of furlough. He married a ladies tailor, Margaret Smith on 24 January 1919 at Leith in Edinburgh, Scotland. He was fully discharged from 2AAH in May 1919 and embarked from England on board the Bremen on 4 June. Brown was discharged from the AIF on 20 September 1919.

Joseph Allen Baillie was admitted to 2AAH on 27 August 1917. He had been wounded in the feet on 7 June 1917 and had his lower legs amputated in France. He was transferred to King George Hospital in England on 28 June and then to 1 AAH in mid August. Two weeks later he was transferred to 2AAH. Baillie was a 21 year old bricklayer when he enlisted on 19 November 1915. He had previously served with the militia. He was promoted to lance corporal in September 1916, but had reverted to private in May 1917 at his own request. He spent from August 1917 to June 1919 at 2AAH, excluding periods on furlough. He also married – to Agnes Morgan on 30 April 1919. He departed England on 20 June on board the Konig Frederick August, reaching Sydney in August. Baillie was discharged from the AIF on 28 March 1920.

The third man to work on the outfit was Frederick Trice. He was admitted to 2AAH in May 1918. He had been severely wounded by a shell in the legs, shoulder and face on 5 April 1918. Both his legs were amputated at the thigh and he lost his right eye. Trice (pronounced ‘Treece’) had enlisted on 19 September 1915. He was 35 years old and was employed as a labourer. He embarked with the 3rd reinforcements of 30 Battalion on 16 February 1916 aboard HMAT Ballarat. In April 1916 Trice was transferred to 4 Pioneers Battalion. On 4 August 1916 at Pozieres he was blown out of his trench by a shell. He was unconscious for 36 hours and suffered back and neck pain. He spent some time in hospital and suffered from shell shock. In late September he was promoted to lance corporal, but reverted to private on departing England for France, rejoining his unit in March 1918. Trice remained at 2 AAH from May 1918 until mid 1919, excluding periods of furlough. Trice also undertook several months of training in fancy leatherwork and a secretarial course from May to October 1919. He still had to undergo a number of operations - in February 1919 he had foreign objects removed from his jaw and at some point in late 1919, or early 1920 his amputations were redone. Although he was born in England and still had family there, including a married sister, Trice chose to return to Australia. In September 1919 his friend Sarah Pike wrote to the Department of Defence asking when he would be returning to Australia so she and her husband could meet him, as he was to live with them. Presumably this arrangement still took place, although he did not leave England for Australia until August 1920. Frederick Trice was discharged on 23 November 1920.

The costume was presented to Mrs Minnie Augusta Rattigan. The three soldiers may have met Mrs Rattigan at the canteen at 2AAH, which had been opened in late 1916, as a branch of the Anzac Buffet. Mrs Rattigan was one of the co-founders of the Anzac Buffet and ran it two days a week from 6am to 10.30pm. The Buffet was established by the London branch of the Australian Natives Association – an organisation of ex-patriot Australians - and was opened in late 1915. It provided free meals and entertainment to Australian servicemen in London. It was originally located at 130 Horseferry Road until September 1916, when it was relocated to 94 Victoria Road. The staff at the Buffet usually fed and entertained 1000 Australian servicemen a day. In addition to serving meals, the Anzac Buffet had a billiard room, reading room and music room.

Minnie Augusta Rattigan was born Minnie Augusta McFarland, the daughter of Patrick and Eliza McFarland, at Barooga Station near Tocumwal, NSW on 23 July 1870. She married firstly Herbert Whitty in 1892 in Corowa, NSW and secondly Alan Mansell Rattigan in 1912 in Victoria. The couple travelled to England where Alan Rattigan joined the 1st Life Guards, one half of the Household Cavalry. He was serving with them in 1914 as a second lieutenant interpreter when the First World War broke out. He later transferred to the Royal Fusiliers and was promoted to captain. Mrs Rattigan’s brother, 5855 Private Leslie Rutherford McFarland served with the AIF.

The couple returned to Australia on 28 September 1919. By 1935 they were living in France and were there when the Second World War broke out. Mrs Rattigan died there on 11 February 1943 and was buried at Cagnes-sur-Mer in the Riviera, south east of Nice.

The costume originally had a hat, possibly made from fur, with a Rising Sun badge on the front. However, this was not received by the Memorial with the dress and tabard. The costume can be seen worn by Mrs Rattigan in photograph P01441.001.