The under belly and nose of 'Taxpayer's Pride', a Boeing B-17-F Flying Fortress aircraft of the ... 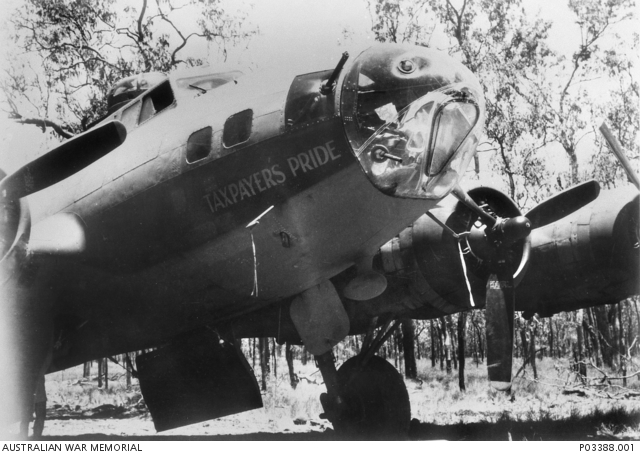 The under belly and nose of 'Taxpayer's Pride', a Boeing B-17-F Flying Fortress aircraft of the USAAF. This aircraft was collected from the Sacramento Air Depot in July 1942 flying to Australia via Hawaii, Christmas Island and Canton Island. On leaving Canton Island they struck engine trouble with the number two engine propeller so they returned to Canton Island and ordered a new part from Hawaii. The wrong one arrived and the engineer, Sergeant (Sgt) Frank P Hohmann, was struck with the idea of using a plumbing pipe fitting with the same thread as the part they were after. The crew voted to continue to Australia using this non-standard fitting and they arrived safely. An Australian mechanic asked them on landing whether they got hot and cold water from that part too! The aircraft was piloted by Captain Jay P Rusek. The crew never flew this aircraft again, learning that it had been lost on 26 June 1943 on a raid over the Gazelle Peninsula, New Britain, shot down by Japanese night fighters.