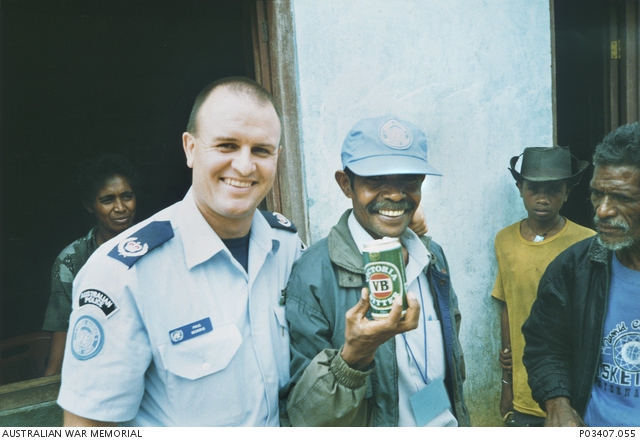 Informal portrait of Sergeant Paul Morris, Australian Federal Police (AFP), a member of the United Nations Mission East Timor (UNAMET) with a locally employed staff member, wearing a blue United Nations cap and holding a can of Victoria Bitter (VB) beer. UNAMET was sent to East Timor on 11 June 1999, to organise, conduct and supervise the referendum, held on 30 August 1999, to allow the East Timorese to choose between autonomy within Indonesia or independence. Following the overwhelming vote for independence, the pro-Indonesian militia launched a campaign of destruction, arson and murder, killing approximately 1500 people and forcing 300,000 others into West Timor as refugees. Due to this the mandate of UNAMET was extended from 31 August 1999 to 30 September 1999, although most members were evacuated by 20 September when the International Force for East Timor (INTERFET) was sent in.