The United Nations: An organization for peace and world progress... 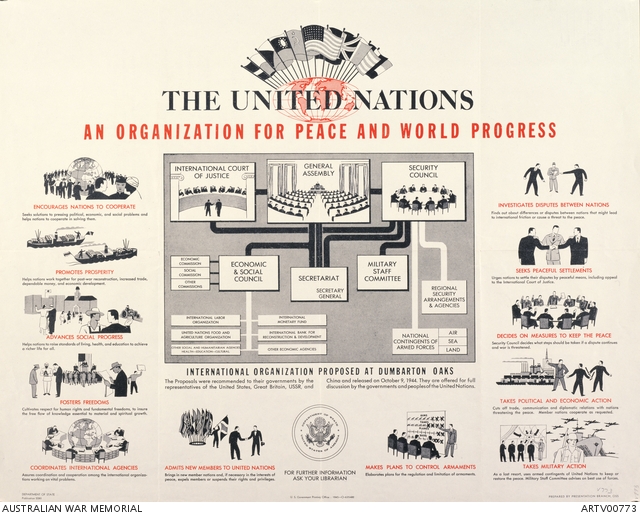 This poster issued by the United States Department of State features a chart showing the structure of the United Nations Organisation and it's relation to other bodies as proposed by Dumbarton Oaks agreements in 1944. The chart positioned at the centre is surrounded by illustrations with captions explaining the functions of the organisation. Printed on both sides it is designed to be folded down to A5 size for mailing out for distribution via American public libraries. A message on the verso asks citizens to hang the Chart on their wall and to 'Think about the proposals. Discuss them with your friends...' and that their understanding was vital to building peace.

This publication was issued in the lead up to the United Nations Conference on International Organization (UNCIO), known as the San Francisco Conference, a convention of delegates from 50 Allied nations held from 25th April - 26th June 1945. It was part of a co-ordinated propaganda campaign involving radio, film, posters and the distribution of over 1,900,000 copies of the proposals by the State Department to explain the Dumbarton Oaks proposals to United States Citizens. The convention resulted in the creation of the United Nations Charter which was ratified four months later on 24th October 1945.