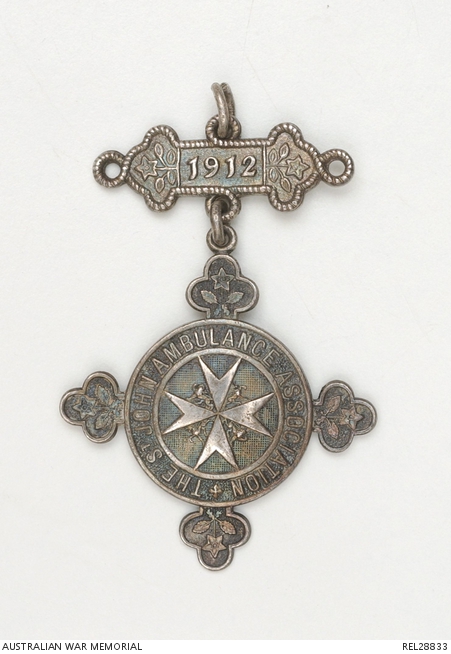 Sterling silver medal suspended from a bar with trefoil ends and an embossed date '1912'. Round medal has four trefoil arms. In the centre a St John of Jerusalem cross with the words 'ST JOHN AMBULANCE ASSOCIATION' around the edge. The bar is engraved on the reverse '142605' and the medal '142605 JAMES M PEGGS'.

1631 Private James Mason Peggs enlisted from Cranbrook, Western Australia on 7 July 1916. He was a 28 year old farmer who was also a keen volunteer with St John Ambulance, and he was appointed as a stretcher bearer with 28 Battalion, AIF. Peggs was killed in action on 4 October 1917. His name is commemorated on the Menin Gate Memorial at Ypres. His brother, Robert William Peggs, served with 44 Battalion, AIF, and was severely wounded.