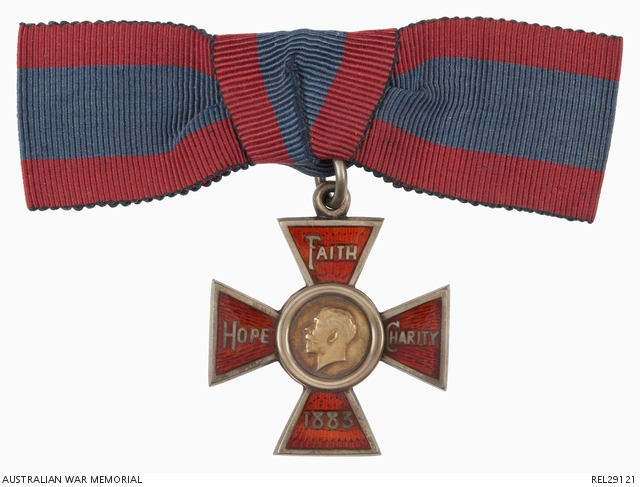 Gold cross with red enamel inlaid into the arms. A central circle shows the profile of George V. The arms bear the words 'FAITH', 'HOPE' AND 'CHARITY' and the date '1883', referring to the institution of the award. The reverse shows a King's Crown and cypher of George V. A suspension ring from the top arm has a red ribbon with a blue centre stripe arranged in a bow. The bow is sewn on brooch fitting. Unnamed as issued.

Awarded to Matron Alice Mary Cooper, of New South Wales, who enlisted with the Australian Army Nursing Service on 12 June 1915, aged 50. Matron Cooper served on the Hospital Ship 'Karoola' and was awarded the Royal Red Cross, Second Class in February 1917 and the Royal Red Cross, First Class in April 1920. On her return Matron Cooper served at Randwick Military Hospital and was present there for the visit of His Royal Highness, the Prince of Wales in 1920.